English industrial and electronic rock veterans Click Click started over 30 years ago. The unique band has now returned with their first proper album in 17 years: “Those Nervous Surgeons” on Dependent Records. A strong album that might also become their last. Mikael Kahrle booked an interview with 2 ”angry old men”: brothers Adrian and Derek E Smith.

Adrian Smith (AS): We set out to produce an album that sounds like Click Click and I believe we achieved it. I don’t yet know how it’s been received but if our track record is anything to go by it’ll receive praise from some and be totally ignored by others; there’s rarely a middle ground. In the past we’ve experimented with higher production values in an attempt to bring the music up to date but it’s never worked out well. We have a sound and with “Those Nervous Surgeons” we’ve gone back to it, back to our roots, back to the 80:s.

Derek E Smith (DS): Very pleased indeed and receiving 8/10 is a great result for us, thanks for that. I think it’s well deserved though.

How come it has been 17 years between your last album and the new one?

AS: I don’t know the answer to that but it could be because nobody asked us for a new album before.

DS: I could not believe it’s been 17 years, in fact I had to check it out for myself, and it’s true. Came as a bit of a shock, mainly because I can’t remember what I was doing for all that time. I must have been trying to keep my printing business from going down the pan.

DS: If you mean more recording and playing live then yes, if someone else finances it. A very costly thing these days, and we’re always short of money.

AS: We live 255km apart from each other and Derek doesn’t do computers, but if I come up with a piece of music that sounds like Click Click I’ll send it to him on CD and suggest he adds the drums. What happens after that is anyone’s guess. We haven’t been in a regular active situation for years and we don’t talk about Click Click much at all so it’s difficult to say if the activity factor will go higher up the scale or not. We’ll have to see how the album sells and go from there. 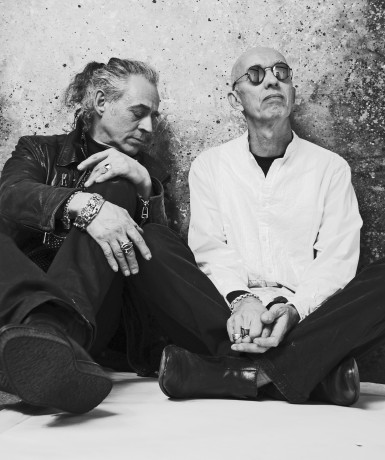 From left to right: Derek E Smith and Adrian Smith.

What have influenced you while making the new album “Those Nervous Surgeons”?

AS: The corruption of the ruling classes, the gagging of the mainstream media and the endless propaganda telling us that we in the West are the good guys. I’m at war with the world. I detest television and I’d happily string up celebrities for free if I thought it would drag the sheep from their sofas and open their fucking eyes to what they wrongly believe is a normal existence. Listening to a lot of Wire also helped and probably influenced more than one of the songs on the album.

DS: World politics, whiskey and weed – one for the lyrical content, the other two for the atmospherics, or that’s what worked for me.

Can you tell us something about the overall theme on the album and the topics in the lyrics?

AS: It’s a concept album based on “What a World”.

DS: When was that song written, 1988? Things should’ve changed by now.

AS: But they haven’t. Twenty six years on and bodies are still burning in the sand.

AS: Injustice. War for profit. The NSA. The bastards at the top getting away with mass murder.

AS: The overall theme is dystopian because we’re already living in a version of Orwell’s 1984.

DS: Not that everybody cares. Some people like surveillance…

AS: …because they believe it’s for their own good.

Starting out in the 70:s

Can you tell me a little bit about how it all started? Those Nervous Surgeons was born as some kind of rock band in 1977 and you launched Click Click in 1982, is that correct?

AS: The Surgeons were the first band we were involved in together, but it was more post-punk than rock. It was a 4-piece guitars, bass, drums and keyboards thing influenced by Beefheart, Can, Joy Division and The Residents – make of that what you will. We had a short lived residency at a biker’s club and played a handful of gigs in pubs around the country before kicking out the bass player, stealing a guitarist from another band and renaming ourselves Click Click. A 3-piece angular rock version of Click Click lasted long enough to record one EP and one cassette before egotistical arguments and artistic disagreements tore the band apart. Click Click (the electronic version) began soon after. I believe we both regret losing the guitarist (Rick Camp). He had some incredibly strange ideas about music that we should’ve pursued further.

DS: Correct, apart from the rock band thing, we never wanted to be rock. We were influenced by Hawkwind and Neu as well as the others already mentioned… we always wanted to be a bit different.

Do you miss the old days? Do you think it was it tough being an alternative band in the UK in the 70:s and 80:s?

DS: Ah the old days. I remember them well. Our own rehearsal room to use 24-7, very basic equipment, loads of good people always around, especially after the pub, it became like a gig. It was a very productive time.

AS: We were full of ambition and we had a clear view of what we wanted to achieve but it was difficult finding the right places to play.

DS: We were light years away from being a pub rock band so it wasn’t easy getting gigs. Small venues weren’t prepared to be partially dismantled in order to accommodate the whims of our lighting man.

AS: And you couldn’t play in London until you’d played in London.

DS: Catch 22. The fact we had a reel to reel tape recorder on stage caused a few cries of “it’s all on fuckin tape” but it never bothered us, we were quite arrogant in those days and knew the music was good enough to silence the doubters.

Are you in touch with other British (more or less) similar bands like Portion Control, Cabaret Voltaire, The Cassandra Complex and The Legendary Pink Dots? Was there a special scene in the UK back in the day, which Click Click was a part of?

AS: I think we shared a meal in a Berlin restaurant with Portion Control once and we did sleep on Stephen Mallinder’s floor in Sheffield but that’s as close as we ever got to any of the other British bands.

DS: We’re from Luton (48km from London, 207km from Sheffield) and we had our own scene to contend with. There were a lot of punk bands in Luton back in the day and they needed somewhere to play so we invited them into our rehearsal/recording studio on Bute Street (Lung Function), gave them space and listened from the room next door.

AS: At Lung Function we used to turn our rehearsals into free gigs. It was a great way for Pete Hosier to experiment with slides and lights and for the band to iron out any problems with the songs.

DS: Bute Street, 33 Arts Centre and a couple of pubs in High Town were our scene. 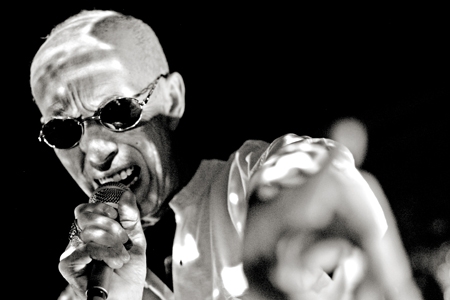 You were on Play It Again Sam in the late 80:s and they released your albums “Rorschach Testing” and “Bent Massive” as well as the successful ”This Is Electronic Body Music” compilation where you participated with the song “Sweet Stuff”. What did this record mean for Click Click?

DS: Two things really: it put a label on us that was misleading but the track itself introduced us to a wider audience.

AS: I think the genre thing has been a problem all along. People want labels for the music and we don’t really belong to any of them.

Some of your old records are quite expensive rarities. Any thoughts on this?

AS: It’s always mystified me that our music has become so collectable, but if anyone has a copy of “Bent Massive” on vinyl…

DS: As far as our old stuff being expensive goes, I wish I had some to sell on Ebay.

Regarding live performances – what can we expect here?

AS: We don’t have the contacts we used to have because most of the others involved with Click Click are either damaged, dead or too successful to be interested in resurrecting a ghost, so it becomes problematic. Live performance is one thing, delivering the goods in a way that feels right is another.

DS: Back in the day we put together a show that was worth coming to see, and it was all done with a few floor lights and a slide projector. Recreating that is not easy.

AS: If we can’t give the fans the show they deserve, is there any point? I want to see Frankenstein’s laboratory on stage, not an industrial karaoke show. Ultimately though, it’s probably not our decision. We’ll play if we’re told to and we’ll give it our best shot, but we’ll always know it could be better.

What’s the current status of your side projects?

AS: My side projects have always run alongside Click Click… or is it the other way around? Currently they are in the process of being assessed. I have a project in mind, a collaboration with a musical ally that will hopefully see the light of day before the year is out. Expect distortion on an industrial scale. I’m also releasing, through Soundcloud, some of the older Paperhouse material and resurrecting some unfinished Toy Shop stuff, but I’ll have to check the contract before I do anything new.