Wax Trax! was started by Jim Nash and Dannie Flesher as a record shop in Denver, Colorado, but was later sold when they moved to Chicago and opened up a new shop by the same name which quickly became the centre for punk, new wave and industrial music in the city. Later it morphed into a label with some small releases, but became bigger with the aforementioned artists. After the “golden years”, the label went bankrupt back in 1992, but was sold to TVT who continued issuing material under the name until 2001 and the last release was KMFDM’s “Beat By Beat By Beat”. 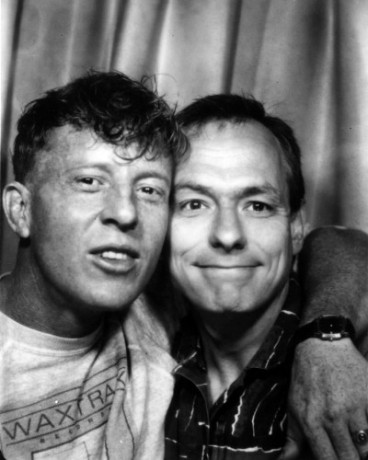 By 2010 nothing remained, with the shop taken over by a dentist and the label offices remade into flats. Jim Nash had died 15 years earlier and on January 10, 2010 Dannie died due to complications brought on by AIDS.

The name has lived on though, and Jim’s daughter Julia Nash relaunched Wax Trax! a couple of years ago. Now, she is starting the label up again by releasing a 12″ by Cocksure – a duo consisting of Chris Connelly (Ministry, Revolting Cocks etc) and Jason Novak (Acumen Nation, Czar). The 3 track single is called “TKO Mindfuck” and comes out in June on vinyl or as digital download, and also features guest vocals by Front 242′s Richard 23 on the title track. A special limited run on coloured vinyl will be available if you pre-order.

A one day only popup store will be opened inside METRO in Chicago on June 15, and will feature the new Cocksure single but Wax Trax! will also unlock their vault of original releases, collectibles and other memorabilia, making them available in a retail setting for the first time since the original shop closed in 1996. There will be DJ:s as well as a couple of special deals. Some really rare test pressings of releases from Lead Into Gold, Front Line Assembly, Coil and other impossible to find stuff will also be on site.

When and how did you start thinking about releasing new stuff under the Wax Trax! name?

- Well… We had been approached for years by fans and some past artists about doing something regarding new releases. It didn’t make sense. What people should remember, even now, is that Wax Trax! was 100% the Jim & Dannie show. You can’t just slap the name on anything, call it Wax Trax! and have it mean something. I think we already saw that in the late 90:s. The label was a true extension of my dad and Dannie together as a very special force. As much as my dad hammered a certain passion for the absurd and unorthodox in my brother and I, we have such a small slice to offer next to their life long vision and foresight. So you can see the reservations.

Julia talks about that they found unreleased recordings in the vaults.

- As we started getting deeper into the filming of the documentary, we would keep coming across pieces of the larger story that really sparked their original creativity. There is unreleased material and past recordings that have been stuck in limbo or have missed a proper reissue. I think that was the source for starting a dialog about it. Luckily, I still have a relationship with many of the original Wax Trax! artists that are still putting out music. We really liked what Chris was doing with Jason and Cocksure. The fact that Richard 23 was also involved on the single really makes it a meaningful release for me. I think what I want fans to know about moving forward, is that we are not trying to reassemble the amazing monster that my dad helped create. What we hope people will take away is knowing that whatever we do, a true respect and care for the projects, artists and history will be first and foremost. Will it mean 2 or 200 releases? I guess time will tell.

Do you have more concrete plans?

- We have a couple things in works, but honestly we really have no intention of operating the same full fledged Wax Trax! that once roamed the earth. We will be putting out limited releases or reissues of very limited quantities when we are excited about something. The packaging will be very important as well. My dad was a pretty intense collector. If I can’t hold the end product in my hands and know my dad would be proud, then there is no reason to do it. Plus… I’m not going to have the time to sit around listening to demos anytime in the near future. It’s all in good fun and a nod to my dad and Dannie.

The Wax Trax! documentary mentioned is in the works. It chronicles the label’s rise and fall, and the people behind it featuring lots of interviews with bands, family members etc. Julia elaborates on the filming status. 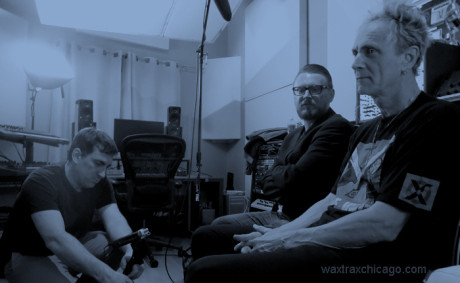 FLA being interviewed for the documentary.

- We are really focused on wrapping up interviews and have a few more places to travel. Just when we think we have a final list, we realize… “Oh man, we have got to interview so and so.”  At some point it just has to stop because we could interview people forever and ever. Right now, if everything goes as scheduled we are shooting for an early 2015 release.

Did you consider going the crowdfunding route? Seems like a popular choice these days.

- Kickstarter was something we were very against from the start. We really wanted to do this ourselves.  That’s how my dad did it and that’s how we should do it!  However, the scales may be tipping. I can understand why it’s necessary and how it can help, but I haven’t been completely convinced. We’ll see… I do know licensing and post production are going to cost a bit of money.

A void in the scene

What do you think of todays industrial and alternative scene? Is there a void where Wax Trax! used to be?

- Ya know, I am probably not the best one to ask about the current state of industrial or alternative music. There are many more people closer to the current scene who are much more qualified to critique or comment. From my limited point of view, the genre definitely grew, split and morphed into something entirely different from the original Wax Trax! era. Change is normal and healthy, but I guess what has always surprised me, are the bits and pieces that stuck or the imagery that was cherry picked from the original Wax Trax! roster. Growing up around it, Wax Trax! never meant “heavier or darker” music to me.

- The true foundation seems to be lost on a lot of people when referencing the label as an influence. Most everything about my dad’s store and label was built from the ground up by very skilled pranksters with absolutely no creative boundaries. Whether it was Laibach or Front 242, there was a tongue and cheek or wink in everything Wax Trax! did (except of course the A Split Second “Mambo Witch” video… they were totally serious!).

- In addition to things like the incredibly sharp wit of Al or Franke overlapping with the amazing experimental textures of Coil, Doubting Thomas etc, you had two insane guys running the show who were pushing punk, electronic, dance, gay culture, really all these truly fantastic fringe elements forward. Timing was everything and those types of underground elements don’t bubble up together very often. If there is indeed a void today where Wax Trax! used to be, you can kind of understand why.

Julia Nash now runs the web site waxtraxchicago.com where you’ll find news, the new releases, and also a very cool assortment of T-shirts. It will be interesting to see where this goes.