The year of Mesh

Mesh has been on a roll this year, with the fantastic album “Automation Baby” which is already on my “Best of 2013” list. Coupled with a successful tour, it’s quite clear that Mesh is one of the biggest acts in the scene today. It was about time we caught up with them again, and so I called up Richard Silverthorn at his Bristol home and had a little chat.

Mesh is one of the most consistent quality acts in the scene, with a lot of hits under their belt. For the new album “Automation Baby” it seems that Mark Hockings and Richard Silverthorn have raised the bar once again. They also managed to enter top 40 in Germany, and are getting bigger exposure than ever.

It’s been a while since Mesh last put out an album. “A Perfect Solution” came out in 2009 which is 4 years ago. The band hasn’t been idle though as Richard explains.

- Hehe, well, we’ve got this question before. A, we’re not the fastest band in the world and B, when we’ve put an album out I feel I need to take a break from it. We put it out at the end of 2009, then we went out on tour with it, had a bit of a break, and then there was talk about a US tour. It was the first time we’d done a US tour, so there was a lot of time managing and planning that, and then we did the “Alternative Solution” which is the remix album. I spent a lot of time talking to people and remixers and organizing that, so even though it looks like we’ve been a bit lazy we were doing a lot of shows and preparing for other releases.

When it was time to begin writing new material for this album, Mark and Rich proceeded as usual. Almost.

- The only difference we’ve made on this album is that we thought it would be nice to write quicker. So instead of spending long periods of time to master these songs and get them to sound right we thought we should just get the idea down very quickly. You capture something that’s better for doing it quickly, rather than spending too long on it. Sometimes you just spend so long on it that you kind of wonder “is this a good song now, I’m not even sure anymore”. And I think it works. We fired stuff back and forth over the internet, and worked on things really quickly and when we got a good song we thought “OK, it’s finished”. 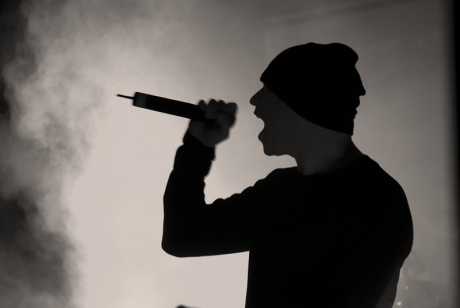 So how do they usually work in the studio then?

- Well, the normal process is… me and Mark generally don’t write together. I know that doesn’t make sense, but… I think we need to be apart from each other to get the initial ideas. Either I’ll write a piece of music and give it to Mark and he will put lyrics on it, or sometimes he will write a song in a very “demo” like form, you know sort of just a guitar, and send it to me. Once we get the initial idea, it’s OK to get together to work on it then. But we find it easier to come up with something when we’re on our own. 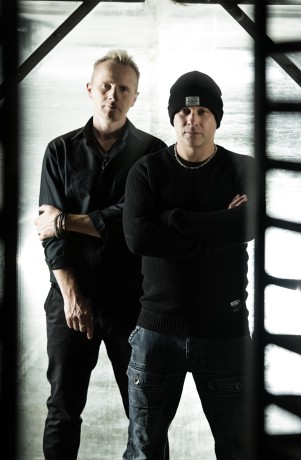 From left to right: Richard and Mark.

They worked with German producer Olaf Wollschläger, as they also did for the last album “A Perfect Solution”. He’s produced and remixed artists like Melotron, Yello, In Strict Confidence, Seabound and many many more. He certainly knows his way around the mixing desk.

- He was very in tune with what we want. We sent him all the recorded bits that we had done in our own studio in Bristol and he was playing around with mixes and ideas and it came out great.

- He is indeed a talented dude, haha! We went over to his studio in Kerper, Germany towards the end and spent about 2 weeks with him and he said it helped him and we thought it helped us, so it was good being in the studio together.

Is that the studio you can see in the videos you posted online?

- Yeah. We had two guys spending time with us just recording everything so it was quite realistic as opposed to what you these other bands do that make you think “they probably set that up” but here all that you saw was for real.

As of now, nothing’s decided regarding the recorded video material. There’s loads more, as the film crew was with them several days. Rich and Mark are thinking about doing a live DVD, and if the idea materializes, it may end up as a making-of documentary on it

To me, it sounds like a lot of the songs could be singles, was that a conscious decision or did it just happen?

- Well, it just kind of happened. It just came together and we always write the same way but possibly tried to push it a little bit further. I mean, you always want to make a better album than the last one. We’re very pleased with the results and generally everybody seems to think it’s our best work and and it’s almost taken us to another level really, so we’re really pleased.

- Yeah, haha! It was a bit of surprise, but a very nice surprise. I think it kind of opens doors for you and people think of you as a “real” band instead of just an underground kind of band, so I think it’s done a lot of good in Germany, certainly. 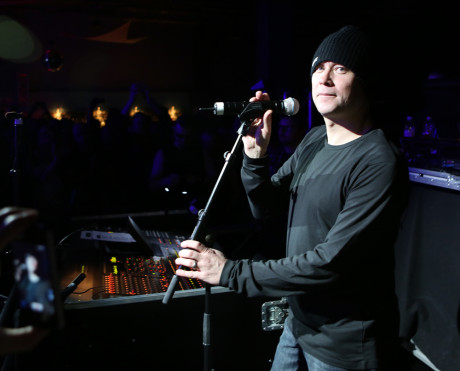 Being part of a scene

I was going to ask you about that, do you consider yourself a part of the electronic scene, or do you want to break out of that?

- Well, it’s very difficult for us because it’s been really good for us to have been accepted into this kind of dark electronic scene, but it can also hold you back. The mainstream festivals probably thinks “Yeah, Mesh is this gothic electronic band” which we’re really not. But, on the other hand it’s very good for us to be accepted in that scene and have such a big following. So it’s done us a lot of good. But we’re kind of sat on the fence, if that makes sense. We’re in that dark scene, but think that at any moment we might crossover and be played on radio and be a more mainstream act. Bands like Garbage and Placebo etc, they are quite dark bands but they are very commercially accepted as well.

Well, you can see what happened to Covenant, who signed with a major label and got tons of money to make videos and stuff, but they never quite managed to make the jump anyway. Possibly because the label went bankrupt though.

- No, but I don’t know if the average person can accept the vocals and the songs. As much as you and I like it – and I do, it’s very difficult for these bands to crossover I think. 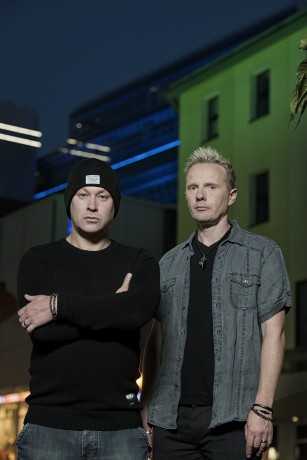 “I can’t write a single”

You’ve been very open during production, with these online “making of” videos and Mark posting a video from his “shed” etc, and you’re also very active on Facebook and stuff like that.

- I try to be, it’s not something that I find easy… Unless I’ve got something to say I find it difficult to say something.

Is the Internet a blessing or a curse. Or both?

- Haha, well I’m not the world’s best pop star, I don’t really like that side of it. But it’s good to get a reaction from people and when we put the videos up it was great to see people’s reactions and we thought “yeah we got something right here, this could be good”.

In preparation for the album, Mesh put up a short video with the song “Born to Lie” online, and fans were wildly enthusiastic. Did that help them choose a single?

- Well, personally I can never write a single. The record company says “you need to write a single” and I say “well, what’s a single, I don’t understand that concept”. It was one of the last things we wrote for the album, and when I finished the music and put it together I said to Mark “this is going to be a bit special”. Just the music alone could stand on its own and I said “this could be the single”. The record company wasn’t sure, but I was completely confident that that was the first thing to put out. I’m not saying it’s the best song on the album, but it was the most instant song for me. It was the best appetizing song for the album.

One of the best songs from these sessions for me is “Blackdog”, which is a B-side!

- Hahaha, yeah it’s funny that. We wrote that while we were in the studio mixing, and said “we need something else, a B-side”. So we wrote that very very quickly and now everybody’s saying that it’s a great song, haha. So it just goes to show that I don’t understand what a single is… 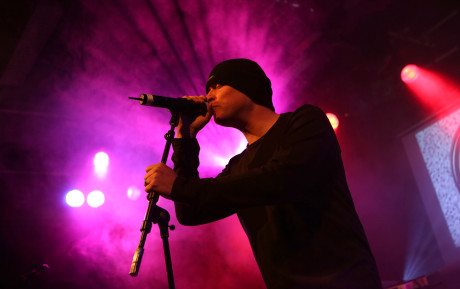 You’ve never been involved with side projects have you?

- No not really, I’ve just been doing some remixes and Mark’s done some additional vocals on things. As much as I would like to do something, I don’t think I’ve got the time to do it. I’ve always fancied doing some kind of dance project or some more commercial things, but had never really had the time to sit and think “yeah I could do that now”.

What about writing for other artists?

- Well, it’s funny. I don’t know if it’s because we’ve got stuff in the charts now, but we got more interest now from our publishers who sends us lists of people and you’d be surprised by the people on this list who are looking for songs on their albums, so it’s something we think about. So maybe we’ll take the time to write something, you never know it might take off, or it might not. But it certainly would be a lucrative thing to do if it did work.

I tried to press Richard for some names, but we’re kept in the dark for now. The future will tell if something comes out of it.

What kind of music are you into right now?

- I try to listen to as much stuff as possible so I do tend to listen to very current radio stations, so I generally know what’s going on. I listen to a lot of dance stuff, and my son is very much into dubstep at the moment, and even though I don’t really want to make that kind of music, I think what those guys are doing is very pioneering. Some of the sounds they use… Knife Party, Pendulum and bands like that, they’re so energetic, and use electronics in a different way.

You had some dubstep influences on “Automation Baby”

- Hehe, yeah, I thought I might try to get this into a couple of songs and see what the reaction is. We’re pulling in influences from all different genres, but we thought it was a kind of funny thing to put in.

So, what are you up to now?

- We are currently thinking about the possibility of a second single and what we can offer on it. Mixes, B-sides etc.

So chances are that 2013 continues to be a good Mesh year. They have more gigs already planned, including one at the huge M’era Luna Festival, a couple of concerts in Spain, and a one-off gig in Moscow in October. Who knows, maybe 2013 is the year when they break out of “our” small genre.

Click here for album by album comments by Mesh.