The New Division – from California with darkness

American dark pop music band The New Division didn’t start out in the typical “let’s gather a few friends and jam along in the garage at someone’s parents house” kind of way. The whole project was originally a college dorm room project for songwriter John Kunkel back in 2005. After moving from Uruguay (where he resided for 18 years) to Southern California, Kunkel began experimenting with synthesizers after being heavily influenced by the sounds of Joy Division, New Order and Depeche Mode. After some time the one man project gradually developed into an actual band. Currently, The New Division is John Kunkel (vocals), Brock Woolsey (guitars), Janzie (synths) and Mark Michaslki (synths).

A while ago The New Division released their second album “Together We Shine” and Release Magazine got a chance to have a few words with John Kunkel, maestro himself.

From Uruguay to California

The New Division is from Southern California but am I totally wrong if I say that your music doesn’t sound like one would expect from a band from this area? Although there are many dark and alternative bands from the state, to us Europeans California is mostly sun, surf, Beach Boys and LA rock’n'roll decadence. Is the musical direction of TND something common in this area as well or were you reacting against some established cliché?

– It’s accurate to say that The New Division’s sound isn’t typical for Southern California. We definitely stick out quite a bit when compared to a large number of acts that do the more “sunny,” “surfy” sound. Still, there are a handful of bands like us who take on the darker spectrum of music. I wouldn’t say the musical direction of TND was a reaction against any established cliché. I knew exactly what type of music I wanted to make when I first moved here in 2005, and for the most part, we’ve kept our sound fairly unique. The city where we formed, Riverside, CA, is quite diverse musically, but certainly there aren’t a great deal of electronic acts doing anything close to our sound.

I read that the whole thing started out as a college bedroom project. Please tell me about the initial spark and your biggest influences, both musical and non musical!

– I first started writing songs for TND during my freshman year of college. I didn’t make a ton of friends at the University I was attending, so I had a lot of spare time on my hands in between classes. I was deep into Depeche Mode’s early catalog around this time. I recall buying my first synth, an Alesis Micron, and I owned what seemed at the time an ancient desktop computer. I was running Cubase and Fruity Loops side by side and literally had no clue what I was doing. A lot of the early songs sounded like a mix between New Order, Depeche Mode and some italo disco. Everything I was writing back then was really dark sounding. Lyrically, it was a lot of jibbersih, but over time I found themes that went hand in hand with the music.

Without a doubt, the biggest influences for me at that time were New Order, Depeche Mode and Tears for Fears. I was 18, and had discovered Joy Division’s catalog a few years before, and was pretty obsessed with them. Someone in college tipped me that I should check out New Order (I had no clue the bands were related) and the rest is history.

I personally sense a very European shimmer in your music and also the name, like a mix of New Order and Joy Division leads me to believe that you’d might be influenced by other postpunk and electronica heroes from the UK and Central Europe. Am I right?

- Yes, this is true. I was heavily into postpunk in my teen years, and later discovered electronic music shortly thereafter. Most of the bands I listened to were from the UK. I always had a fetish for acts that came out of Manchester and surrounding areas. It seemed like everything that was being made over there was different and aggressive. As a teenager living in South America (Uruguay), I was easily drawn towards everything coming out of there. My favorite bands growing up were Oasis, The Jesus and Mary Chain, MBV, The Verse and Joy Division. I later fell in love with Massive Attack, Portishead, and Morcheeba. As far as Central Europe, Kraftwerk were probably the first electronic act that I took seriously and religiously listened to. I was introduced to Royksopp and Air around that time as well. 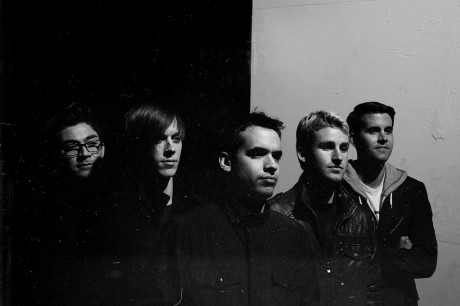 How did this bedroom project turn into the success? I guess it didn’t happen out of the blue … Was it hard gigging and publishing tracks all over at first?

– It was a combination of writing tunes that I thought were great, patience and time. It was really hard to get shows back then because we weren’t a full band until about 2 years after the songs had been written and gained a bit of local following. Since most of the music being played out in local area was mainly punk and emo music, we had a hard time finding acts we could play with. Publishing the tracks was fairly easy, thanks to the internet.

How do you actually produce the music, do you jam together or is the songwriting and programming kept as a separate process that is then translated into live performance versions?

– I’ve always been a bit of a loner when it comes to songwriting and producing. Only in the last year or so have I been collaborating with other artists. I didn’t always enjoy the process of working in a room with someone else while I’m producing or writing, but I’ve opened up quite a bit. Usually, I know exactly what I want, and how I want to do it. This doesn’t mean, of course, that the other band mates don’t help with the songwriting process at all. There have been many occasions where I’ll start a song and one of the guys will come in to give feedback, or write a part for a song that I could’ve never imagined writing. “Memento” is a prime example. I had an arrangement that was fairly decent, but I really wanted to take the song to the next level, so I brought in the guys and we all finished it together. Without them, that song wouldn’t be anywhere near as good as the original idea. Typically all the songs are written and recorded in Fruity Loops and then later translated into an Ableton Live set. That’s where the rest of the band comes in and does what they want with it. We never want it to sound exactly like the recordings, but we also don’t want to stray too far from it either.

I think your new album sounds a bit less “alternative” than your debut. Was this an intentional step towards a wider audience?

– Part of me would agree that it was a step towards a wider audience, but at the end of the day I was making music in response to the collapse of the material that was supposed to come after the “Shadows” album. After my hard drive had crashed, and all my backup project files became corrupted, I figured a good motivation to continue writing would be to start fresh, and try a different direction. The new songs surely have a more pop-oriented nature, but I can’t say that was intentional from the beginning. They came out that way, and we all ended up loving them.

So, tell me about the future – what happens now?

– I’m currently working on a remix album for “Together We Shine” that should come out this summer. It’s been exciting going back and reworking the songs, giving them an edge that didn’t exist before in the tracks. We also have planned to release two new EP:s this year that go back to the “Shadows” sound a bit. I’m pretty anxious to release them, but as you know all this stuff takes a lot of time and planning.

Are you coming over for some live shows outside the States?

– As of now, we’re just touring over here in the US. We can’t really go outside of this country until we gain a larger fan base and do a few more releases. As most of our fans are aware, we’re an independent band without any real label support. Everything we do, whether it be releases, shows, or touring is all self-funded at this point. Hopefully in the near future we’ll be able to do a proper tour around the globe.

Release Magazine’s “Together We Shine” review by Peter Marchione.