Synthpop quartet Thermostatic restarted with a concert at the Electronic Autumn festival in Gothenburg last year and tomorrow their comeback single will make its first appearance at another Gothenburg gig at Jazzhuset.

“Animal” will be given to the first 50 visitors tomorrow and released properly by the band itself at a later date. Another single is in the making (even though nothing has been decided yet) and maybe a new album.

“Animal” is a step farther away from bitpop and happy synthpop. It has a more dark and heavy sound.

Peter Marchione from Release is a member of the band. 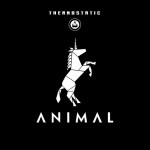