Fix8:Sed8 have steadily been rising through the ranks of the electro industrial scene, getting stronger and stronger with each release. Melding Vancouver industrial à la Skinny Puppy and Front Line Assembly with its own twists and turns, the latest album “The Inevitable Relapse” further cements the band’s position. So we figured it was time to reach out to the man behind the name, Martin Sane.

This is your fifth album. How would you describe your own musical progress throughout your career?

- Exactly as that: progress. My main objective is to write better songs with each release. Naturally I’ve learnt a lot in the past 15 years when it comes to songwriting and the technical aspects of making electronic music, which gives me more freedom to realize the ideas I have. I always want to be able to say that my latest release is my best to date. I dare to say that I’ve accomplished this with “The Inevitable Relapse”.

Are you pleased with how your new album has been received so far?

- Very much so! Considering how tough the times are for many people and that money is tight with some, the sales have been extraordinary and I am extremely grateful to every single one of them!

Reviews have been more than flattering but most importantly, the fans seem to love it! I am very proud of this album and while I make music for myself and it is and always will be a hobby, I would’ve been disappointed if people didnt like what I consider “the best I can do”. All in all, I’m super-happy with how everything went. 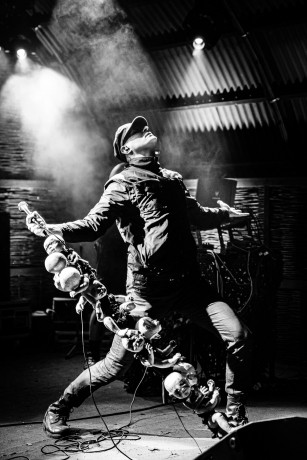 Which artists have inspired you the most and are there any newer artists that have made an impression on you?

- I guess subconsciously many musicians are influenced and inspired by bands they like. So in my case that would be Skinny Puppy, Tool, Peter Gabriel, Gridlock, Pearl Jam, The Cure, U2 and many more. Not exclusively electronic music but also not that many genres besides it. I am not exactly what people would call someone with a broad horizon in this regard. Which answers the next question. I barely check out new bands or music. The last time I was blown away by a new band was Interlace and the Necro Facility debut. And of course, more recently, 2nd Face. This guy managed to invent a new genre and immediately master it. In a better world he’d already be where Combichrist are now.

Can you tell us something about how you create your music, how you take a track from idea to completion?

- More often than not I am starting with the drums. Programming interesting and complex drum patterns is extremely difficult, at least for me, but they are the core of most of my songs and it’s much easier for me to take it from there, with the foundation being laid already. Then you build it up with different basslines, pads, sequences, layer on top of layer – until you have a brilliant 16-32 seconds snippet, haha.

I need at least 4 of such small pieces, often 6 or 7, all different from each other. I then try to put them together in a coherent shape. Where motifs repeat I add layers or change patterns so that there is variety within the repetition too. Then I listen to the song over and over again. Pretty much with every go, I notice something that can be improved. I will continue doing so until I don’t notice anything anymore that bothers me.

Then I listen to it dozens of times again, trying to figure out how to do vocals for it. At the very end I write lyrics, record the vocals and send the single tracks to Arnte for mixing.

As I understand, this album was almost entirely conceived during the current pandemic. How did this influence the music?

- Not at all! At least not when it comes to its subject. The only impact the pandemic had on the entire process was that I had slightly more time than I would have had otherwise. The outcome would have been exactly the same though, with or without pandemic. It might have taken a few months longer to finish it, that’s all. Having said all that, I don’t mean to make it sound like there isn’t any high quality new music out there! Quite the opposite!In the end it’s a matter of taste though and I happen to be a horrible snob when it comes to music.

Tell us about your collaboration with Arnte from dark electro project Pyrroline?

- We have been friends pretty much since both of us started with our projects. He produced my previous album, we have a good work (and beer) flow and there was no reason not to work with him again. He’s great at what he does and it’s always heaps of fun to hang out. Not to mention that I am learning a lot watching. 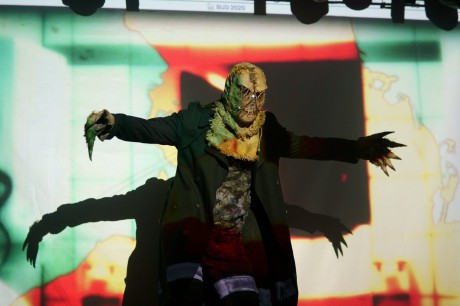 The bonus version of “The Inevitable Relapse” includes an extra disc where other bands have done covers of your songs. What inspired this idea?

- While in general I prefer to have my own exclusive bonus tracks on the bonus CD, I simply didn’t have any leftovers this time so I had to get creative. I didn’t want to do just another remix CD. And while the line between a remix and a cover is blurry, the main difference being that the covering artist has to add their own vocals, I thought that this would give the bands the utmost freedom to get creative in an unrestricted way. I find the results extremely interesting and exciting. Some stayed closer to the original, others made the original their own and basically made an entirely new song. I love how the bonus CD has turned out to be its very own beast.

How did you approach these bands?

- Through the magic of the internet. I know most of them personally and/or I am friends with them. They all said yes immediately when I asked them and there was much less begging and bribing involved than one would expect.

What are your future plans, including possible side projects, remixes and collaborations?

- I’d love to play live shows with the current album as soon as it’s possible. I usually turn down remix requests though, I prefer to focus on my own stuff. Of course if one of the bands who did the cover versions for me asked me I wouldn’t hesitate to do it. They’ve been through hell and I owe them this much. And I am already working on the next album. I’d love to have the demos finished by the end of the year and release it in 2022.