It’s always good to be back at Sonar, after all it means being back in the centre of Barcelona, probably one of the most beautiful cities in the world. Also, Sonar is one of those festivals that doesn’t pander to commercialism as such – it’s true, you do have the big names (this year Chemical Brothers (main pic), ASAP Rocky and Duran Duran are some of the acts fulfilling this criteria), but it is more about the music you don’t know that make it an exciting proposition. So it was with eagerness that I went through all my formalities before entering into the arena of sound that is Sonar by Day.

Determined to learn from my mistakes of the past at this event (and there have been a few – for example relying on energy drinks does not adequately replace sleep!), I decided to take it easy on the first day of Sonar. The first act I was able to see was the combination of Jimmy Edgar and Machinedrum, together known as J.E.T.S.

It was lovely to listen to some good music under the slowly fading sun and heat, so I spent the whole set there, before taking my first trip SonarHall to “see” Autechre. The reason for the speech marks is because, true to form, Autechre blacked out the whole venue space, to create their purely aural experience. As good as it was I did find myself creating a new game, watching people try to dance to the sounds of this classic Warp Records duo.

To balance things out, I decided to make a trip to the SonarDome and the Redbull Music Academy stage, to catch Mumdance & Novelist feat. The Square. The energy of this brand of grime music matched ably by the energy of the rappers whipped the crowd up into an early frenzy – an early contender for set of the festival.

To finish, the last set of the day went to Hot Chip, where the warmth from the crowd towards them echoed the warmth felt temperature-wise. Quite simply the crowd loved Hot Chip and lapped up song after song, while it seemed clear that the feeling from the stage was mutual. I left the festival with some of that warmth in my heart too, as I glided back to the streets of Barcelona.

Feeling quite fresh, it was a leisurely arrival to Sonar by Day on Friday, taking in the sounds of Redinho on the SonarVillage stage before a trip to see Russell Haswell of Mego Records perform a brilliant set in the SonarComplex. It was over to the SonarHall to see a visibly impressed Kate Tempest, who was as delighted as the crowd when delivering her stream of conscious raps.

Back to SonarVillage to see the legend that is Arthur Baker perform a DJ set to the masses, followed by Dorian Concept who also brought the crowds alive in the slowly fading light. 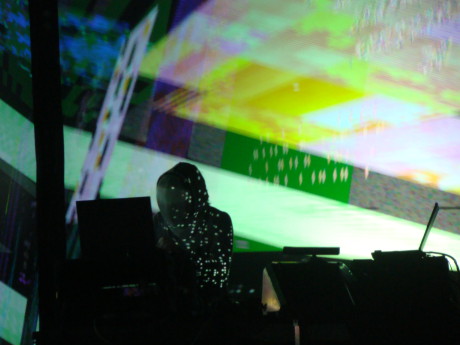 A trip to Squarepusher (pic) at the SonarHall, with the man in top form, playing tracks that spanned his career, as well as focusing on the recent album material, and then it was off to join the queues as we all changed venue…

Sonar by Night always seems much bigger than I remember, and the cavernous entrance that greeted me this year as I walked towards the main venue was no exception. The action started fast, with ASAP Rocky hitting the SonarClub stage hard. The crowd went crazy for the action happening on stage coming from the latest American rap superstar.

As people got down to raw hip hop, I dashed over to Roisin Murphy for a slightly more chilled vibe, and a variety of theatrical costume changes. Hudson Mohawke played live on the SonarLab stage and really got the crowd moving with tracks from “Lanterns” and some of his collaborative work too. 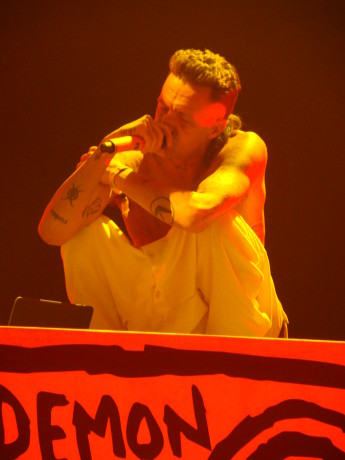 Die Antwoord (pic) were amazing again, and even more memorable than the show I saw a couple of years ago – placing themselves almost as evil cartoon characters playing helium vocals and rap over techno beats.

Rather than watch Hot Chip again I went for Tiga (live) followed by Maya Jane Coles, both of whom provided sophisticated beats for their respective take on electro. Being that I was still awake and alert (told you I had learned my lessons of the past), I still had enough left to take in Skrillex again (who I preferred the previous time if I’m honest, I missed the spaceship of the last Sonar appearance!), as well as Jamie XX, who was totally adored by the crowd. Finally for me, Daniel Avery – with a crisp set of techno beats to take the sounds into the early morning. Happy I had seen enough it was time to head for the door, and back blinking into the coming daylight.

Back in action for Sonar By Day – mainly to get everything sorted for the evening, as it was a big night ahead, but I did manage to catch a few acts along the way.

The interesting acts were mainly located around the SonarDome stage for me today – with the amazing Psychic Mirrors starting things off (I really wanted to see Jimi Tenor, but the 2pm kickoff time proved a step too far for me). Then two acts from the UK blew me away, for different reasons. First, The Bug with cast iron beats booming the SonarHall into submission, then back to SonarDome for Skepta & JME, bringing a bit of London grime to the event. Pumped up, it was the trip over to Sonar by Night… 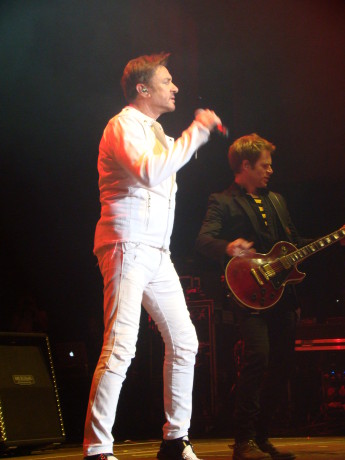 …and just in time to catch Duran Duran (pic) kick off events – and impressive they were. Happy to accommodate those fans wanting a Saturday night party, they played “Wild Boys”, but it was their amazing take on Grandmaster Flash’s “White Lines” that brought a shiver down the spine. 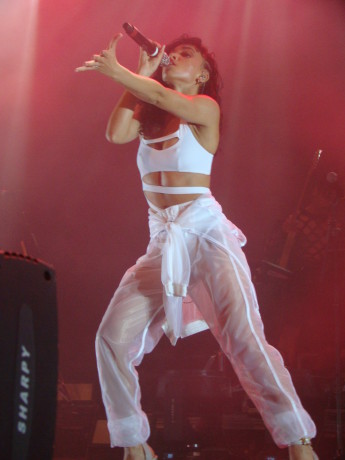 Another dash sent me to FKA Twigs (pic), who was mesmerizing with her bewitching electronics and sensual dancing. 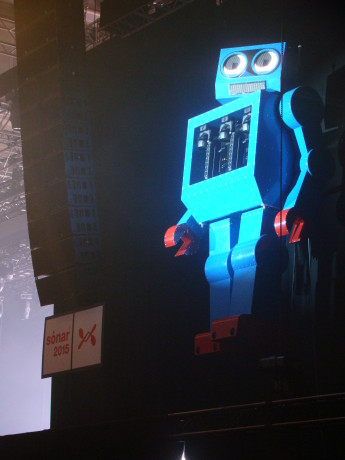 The main event for me was The Chemical Brothers, and for most of Sonar by Night it seemed too. Not disappointing, they took SonarClub in their hands and didn’t let go until about 1.5 hours later. With a mixture of tracks old and new, a stunning set of visuals, including those amazing oversized 50:s robots you can see in the picture, and the biggest crowd I have seen at any of the Sonar events, the night, and probably the weekend, belonged to them.

It could have been so easy to sign off after such an amazing set, but that would not have done justice to the acts like Flying Lotus, Annie Mac and SiriusModeSelektor, all who entertained in their own ways, and were amazing because of it too.

The walk across from the SonarPub stage all the way back to the exit seemed to take forever as tired limbs took hold, but as I stood blinking into the daylight, looking around for the bus that would take me back home, it got me thinking.

I have been to a lot of festivals now, and seen most of the acts I could ever have wanted to hear and see. Could this be it now? Could I hang up my camera and notebook and retire happy from the late nights and the loud noise? And just as quickly as this thought entered my head, I already began to miss this festival.

So I guess the answer is Sonar – I hope to see you next year and for many years to come.

All photos by: Mike Whyte (Release)