Re-release of the impressive Mind.in.a.box trilogy

Long time Release readers are familiar with our love for the Austrian electronic band Mind.in.a.box. The only reason they didn’t show up in our Best of 2019 lists is probably because they did not release anything… Now, Dependent Records re-release their three first albums. 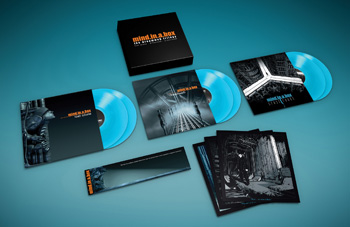 “Lost Alone” (2004), “Dreamweb” (2005) and “Crossroads” (2007) were released separately but work as trilogy with a Matrix-like story arc. This time you can once again order them separately but also as the “Dreamweb Trilogy”. This limited edition (300 copies) box contains the three albums with extra tracks taken from singles on blue vinyl (three double albums) with large format artprints. The albums have not been previously available on vinyl.

Dependent’s Stefan Herwig recalls what impressed him when he signed Mind.in.a.box:

- They had in spades what most parts of the electronic industrial scene in 2003 were lacking: Originality, great complex sequences, hypnotic harmonies and haunting vocals, partially vocoded, partially distorted. They opened an entire new music universe.