Release writer Sebastian Hess talked to Adam Anderson, one half of Hurts, about their 5th album “Faith”, partly recorded in Release hometown Gothenburg, struggling like Depeche Mode and the fact that singer Theo spent the first two weeks of lockdown in the company of only an octopus named Arnold.   Singer Theo Hutchcraft has said that the new recordings were driven by the “darker elements of pop” and that the lyrics were inspired by “isolation, desperation and mania”.

Even though the Covid-19 pandemic is still affecting traveling, live shows and so on you decided to go ahead with the release of the album. How did your thoughts around that go?

- When the lockdown in the UK started we simply didn’t know how long it would last, so we decided to go ahead with the plan we had. We didn’t want to risk losing too much time and when you’ve created something, you really want to get it out to get some closure on that project. In the end it was an easy decision to make, Adam Anderson tells me.

You’ve said that this is your most complete album, what do you put in the word complete?

- For me it’s an album that encapsulates everything good with our band. For me this one stands alone and is the most accomplished album we’ve released. It says the most about who Theo and I are individually and it’s the best of us as a partnership. 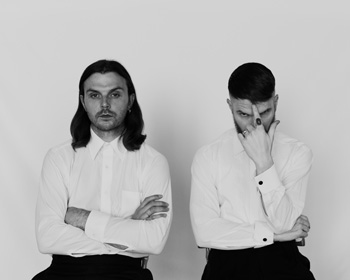 “Great things can come out of a band struggling”

Many Release Magazine readers are big Depeche Mode fans and I think many of them who heard your new single “Suffer” directly thought of the Depeche album “Songs of Faith and Devotion”. Are there any similarities between Hurts in 2020 and Depeche in 1993?

- It’s interesting that you say that as “Songs of Faith and Devotion” is really my favourite Depeche album. I think that there are similarities. That album was notoriously hard for Depeche to make and our new album was really hard for us to make, especially for Theo as he was struggling with some inner demons. I think great things can come out of a band struggling.

You mentioned once that the version of “Silver Lining” from your debut album “Happiness”, was the 72nd version that you did, how was the recording process this time? Have you become more effective?

- Wow, yeah I remember. I think in the past we’ve been guilty of overworking things a bit. We’re both perfectionists and then you risk working songs to the ground. Nowadays we have a better understanding of who we are and what it means to make a Hurts song. The perfectionism isn’t holding us back as much nowadays.

Hurts has always felt like a project where you and Theo are in complete control of everything from the music to the styling and the artwork and every little detail, was that the plan from the very beginning?

- This comes from a bit from mistrust actually. When we started we didn’t really trust anyone but ourselves so that’s why we did so much of the work. Then that carried on during the years and with this album we’ve done pretty much everything ourselves – from the photos to the artwork and the music of course. It’s a lot of work but I think it shows the fans who we really are.

I saw that you posted online when you sat for days signing thousands of CD:s, vinyl albums and cassettes, have your hands and fingers recovered?

You’ve recorded in Sweden in the past and worked with Swedish producers before but this time your long-time collaborator Jonas Quant wasn’t involved, was he?

- No, Jonas wasn’t but his assistant Martin Forslund was. He’s been an assistant to Jonas for a few years but nowadays he does a lot of work by himself as well. A really great producer and he doesn’t have a huge emotional history with Hurts. He was like a fresh face and I think we needed that new perspective.   As many creative Swedes he’s multitalented and we really enjoyed our time and work with him.  We did spend some time recording in Gothenburg this time just like we’ve done in the past.

In the past you’ve mentioned that you’re big fans of Swedish artists like Robyn and Fever Ray. Have you tried contacting them for collaborations?

-No, I think that sometimes it’s best to keep the distance to your heroes. I remember seeing Robyn at a festival and first thought I should go and talk to her but then I thought I’d rather keep the illusion that she’s fantastic. We’ve always been big fans of Swedish artists and music and we’d love to play more live in Sweden.

Yes, I saw your tour schedule for 2021 and still no Swedish dates on there?

- Unfortunately it’s a question of logistics. It’s the same with other areas of the world like South America. As the production and the crew that we’re touring with is quite extensive we’d end up losing money if we were to do shows in some areas, which is a shame.

And then the Daily Mail journalist in me must ask: I read that Theo spent the first two weeks of lockdown with just an octopus named Arnold as company. How did that happen?

- Ha ha, it’s true and it was surely an eventful period for him. But he’s actually been pretty quiet about his time with Arnold so you’d have to ask him for more details.