More Agent Side Grinder than ever – interview

On April 26th, 2019, the new trio rendition of Agent Side Grinder released “A/X”; an album with several sonic differences compared to earlier work; without losing their special blend of dark, cold and catchy. This album is also the maiden voyage for their new singer, Emanuel Åström. Peter Marchione caught up with Peter Fristedt and Johan Lange at the release show at Debaser Strand in Stockholm.

Drop the bass and go shopping

Although going from a five-piece band to a trio and replacing the vocalist obviously means a certain development of a band’s sound, Agent Side Grinder themselves consider the new album both a fresh start and a logical follower to “Alkimia”, released in 2015.

– I think it would have sounded different if we had produced it with the same setting, but at the same time, the development also feels natural. We’ve managed to take our music in a new direction but still, without losing our established sound, Johan Lange says.

– We’ve also consistently focused on picking out what the crucial ASG ingredients are in order to highlight them. In many “A/X” reviews people consider this album to be “More ASG than ever” – which is great to hear, Peter Fristedt continues.

ASG in 2019 is a bit colder, harder and more electronic. Since they lost the bass player, they had to use programmed synth basses, also on older songs performed live.

– Almost immediately we started changing our old songs to fit this new trio-based way of presenting them, without really reflecting over that it only was me and Peter left, Johan laughs. We never considered calling it quits, which might have been the more rational thing to do.

– Quitting was never an option, this band is like a company in which we’ve invested so much time and money so … there was no way this would mean the end of ASG, Peter explains.

– We were also very supportive to each other; “We’ll make this work!” and pretty soon, when we started trying out the new versions of the songs, we also felt that “Yeah, this will work, for real!” Johan states.

– We also sold some old stuff and bought new equipment, like e.g. a new Akai MPC for about 2 500 Euros, Peter remembers.

– We also bought a bunch of new synths one might say we shopped ourselves through the crisis! Johan says and both him and Peter laughs. 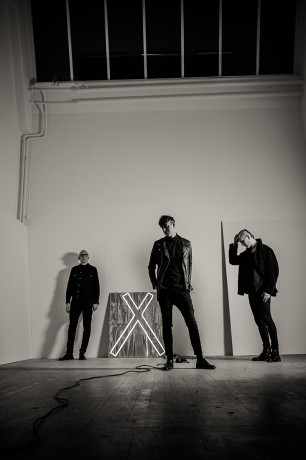 Since there are obvious differences between the voices of former singer Kristoffer Grip and Emanuel Åström some of the old tracks also needed some tweaking, like e.g. key changes. While Grip had a certain deep goth credibility Åström is somewhat more nuanced.

– Most tracks actually worked fine as they were, and we also pushed Emanuel to go a bit lower. Keys are often very important for the overall feel of a song. Also, the vocals of ASG is of a more post-punk style and Emanuel can handle that and also goes quite high. He manages to develop our sound without changing the tone too radically, says Johan Lange.

Emanuel Åström was a new acquaintance for most people, but he was far from a beginner. Peter explains:

– He was pretty experienced actually but had mostly been involved in other genres. Like e.g. rock cover bands.

– He is a strong stage persona and also interacts with the audience, which is very important, Johan continues.

– And he was into our kind of music; he actually booked ASG to a club in Uppsala a few years ago and was even starting a band just at the time we managed to get hold of him, Peter explains.

The overall opinion among both reviewers and fans is that the ASG trademark is intact:

– When Tobias Bernstrup [an alternative artist] saw the new press photos he told us there we still looked the same. I wonder what he meant exactly; we used to be almost twice as many people in the band, Peter explains and both him and Johan laugh out loud. He must have meant the tone in the imagery.

A quite boring fact among electronic-based artists is the lack of real live elements on stage. Quite a number of bands run stereo mixed backing tracks which are, more or less, full instrumentals of their songs. In practice, this means that numbers of “live shows” are in fact bands pulling off a karaoke stunt – dubbing some keyboards, at best. If they are connected to the PA, that is. Peter and Johan describe their live setup:

– About 50 % is played on stage and the pre-programmed parts are played on an eight-track Cymatic machine. We used to run an Akai MPC, actually triggering fills in real-time. But that was a pretty scary thing to do since we always risked pressing stop or skip accidently, making a complete mess, says Johan. Sending multi-track to the mixing desk also gives our sound tech Pontus better options to tweak the sounds at each venue.

Right now, ASG are touring to support the new album. There are several festival shows this summer and they are also preparing a long European tour this October. Recently they were also signed to Metropolis Records in North-America (but they’re still on Progress Productions in Europe).

– We’d love to play over there too, and we are making plans. But going to the States requires quite some work like e.g. fixing visas and transporting our equipment a long way. We’ve actually been contacted by several clubs already, asking us to play, Johan informs.

Even though many Americans love harsh industrial pop and cold post-punk, the Agent Side Grinder sound is a distinctly European affair. It’s almost like the cold war never ended.

Photos 1 and 3 by: Ludvig Lindqvist