Lindemann interview – birds of a feather…

The Lindemann collababoration project was presented a while ago with the release of the “Skills in Pills” album. One of the reasons behind this was, most likely, to raise eyebrows and trigger moral panic attacks among certain groups of people… Release met up with the two gentlemen Till Lindemann (Rammstein) and Peter Tägtgren (Pain) in Stockholm.

Till Lindemann and Peter Tägtgren have known each other for about fifteen years but it wasn’t until a few years ago they started thinking about creating music together. After all, they have been quite busy on their own – Lindemann as vocalist in Rammstein and Tägtgren in Pain and Hypocrisy.

– I still have a hard time grasping we actually managed to pull this off! Tägtren exclaims. We had no master plan from the very beginning but rather just tried out what would happen if we’d put our heads together. We had no intention of releasing an album and definitely not on any major label.

– We wanted to avoid the circus that surrounds the whole music business as long as possible, Till Lindemann continues. When it comes to Rammstein we have a crew of approximately 200 people, from record label representatives to management, so with this side project both Peter and I wanted to get away from all that for a while. This also kept us from being given any deadline, which felt really good! 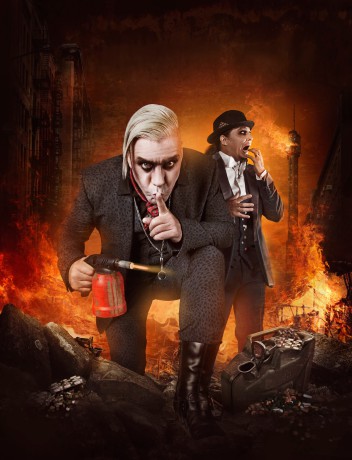 During the writing process both team members worked at home, in Sweden and in Germany, and the different ideas were sent back and forth via the internet. Mostly Peter Tägtgren produced the instrumental music while Lindemann wrote lyrics and vocal harmonies. Even thought they are both very strong musical characters they claim that they never had any real arguments during the production of “Skills in Pills”.

– We do have different views but we have consistently been very open minded, letting us try out different things as we’ve moved along. Even though I’ve been doing much of the tech stuff and the production it was never the case that I was in charge of what the music would sound like. A big part of my work was to take in whatever input Till had and interpret this when mixing and producing, Peter Tägtgren says.

So, are you telling me you hade no overall concept for the album initially? I personally get a lot of different references popping up in my head when listening to it – from classic guitar-based industrial rock to pop stuff!

– Peter is really into this shit-metal while I am more of a goth guy, Till Lindemann laughs. But we tried to utilize this friction instead of arguing. Sometimes I had to hold him on a leash so he wouldn’t overdo stuff! In the end he is very responsive and developed both his own and my ideas into something really good.

Both Rammstein and Pain are sonically from a crossover world, mixing electronic music with metal. Of course, this makes me a bit curious how they personally got into two different genres that we’re a huge taboo to mix back in the days.

– For me it was all my dad’s fault! Tägtgren says. He used to build synths in the seventies, without knowing how to play them. He just loved their sounds and also played me a lot of Jean Michel Jarre. When “Oxyene” came out when I was about six years old I was completely overwhelmed! Later on I discovered rock bands like Deep Purple but from the very beginning Jarre was my thing! Another huge discovery was when Depeche Mode released “Music for the Masses” in 1987. I didn’t like them before but with this release they managed to present a certain metal feel, which they have kept ever since. I also loved “Songs of Faith and Devotion” and “Ultra”. These albums, along with the “Mutter” album by Rammstein are real masterpieces of the genre. I was personally also very influenced by the goa trance wave in the nineties. This scene managed to run a loop for ten minutes and still keep the tune interesting. The sounds were just so great!

– In Germany we never really hade this polarization between electronic and guitar based music and there were also bands from the US mixing these two like e.g. Ministry, Lindemann remembers. A German band that were really a huge influence was Die Krupps, and not only to us but to many other bands in Germany and the rest of the world.

Till Lindemann has often been asked if side projects like Lindemann equals the end of Rammstein. That is, obviously, not the case. Rammstein have announced a summer festival tour 2016 and:

– Both Pain and Rammstein still exist and when it comes to Rammstein we are working on a new material.