During 2011 Kraftwerk introduced a new live show in Munich and in the spring of 2012 Kraftwerk performed 8 nights in a row at the Museum of Modern Art in New York. During these concerts some new 3D projections were shown and continuing that theme it has taken Kraftwerk to the US, Japan, Brazil and to my personal joy Gothenburg and the Way out West festival.

When Kraftwerk was revealed as the headliner for the festival many of my electronic music friends were left in agony, should they front the USD 150 for a one-day ticket to see Kraftwerk or not. I was blessed with press accreditation – problem solved.

Everyone in the audience got a pair of white paper 3D glasses with the Kraftwerk logo on one side and the numbers one to eight printed on the other side; very stylish, but also a bit unusual looking when seen by the thousands. On the third and final festival day at 22.20 (or perhaps, if my memory serves me right, uncharacteristically even a few minutes before the announced time) the four Kraftwerk members entered the stage after we were greeted by the usual computer voice introduction: “Meine Damen und Herren”…

The live line-up of Kraftwerk of today is Ralf Hütter, Henning Schmitz, Fritz Hilpert and Stefan Pfaffe (on stage from left to right as seen from the audience). Anyone having problem with this line-up should be reminded that both Mr. Hilpert and Mr. Schmitz have been members of Kraftwerk longer than 2 other classic line-up members were in the band. Even Mr. Hütter has stated that the music and concept is more important than the musician’s involved.

The stage setup is very similar, but not identical, to the last few tours; each member having a workstation, comprising various specially built gadgets and controllers, and dressed in their luminescent striped clothes. Behind them they now have the slick 3D projections. The concert did not start with neither “The Man Machine” nor “Numbers” but with “The Robots”, slowly at first and then revving into the classic beat. No robots on stage, but very cool 3D renditions of them instead, arms protruding towards the audience. Being in the fourth or fifth row just in front of Mr. Hütter I had a magnificent view but friends in other parts of the audience later told me that the 3D projections worked really well from all vantage points.

It must also be mentioned that the 3D projections were super cool most of the time, it really worked in a concert environment. If you can call a Kraftwerk performance a concert at all. To me it is more an art statement, in regards to visuals of course but also how they manage to be at the front of technology and do their own thing more than 40 years after the formation. 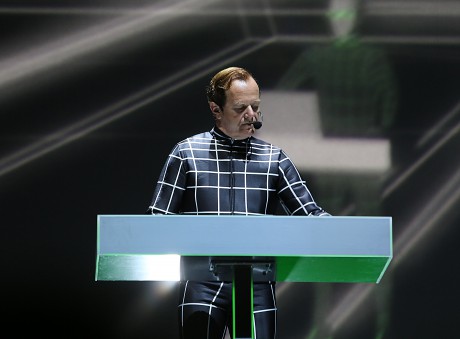 Next up was a really nice version of “Spacelab” with the antennas of the station almost piercing us it appeared. At this time it was obvious that this concert would be one of the most memorable I’ve been to, though the sound did not seem perfect to me, especially Mr. Hütter’s voice was mixed really low and the lack of midrange was quite disturbing at times. During the show I even spotted Mr. Hütter signaling the in-ear technician that some adjustments had to be made. It should be said that the sound quality increased throughout the show and by the fifth of sixth song it sounded brilliant.

Below is the entire set list, note that some songs were entwined into each other: 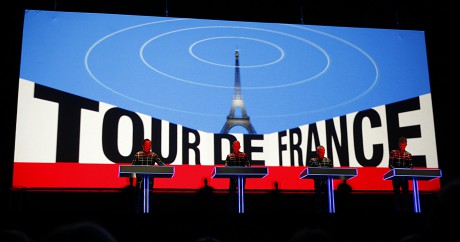 Highlights for me was the “The Robots”, the latter part of “Autobahn” which was mostly improvised, “Tour de France” which included both the old version and the one from their latest album fuelled by old and new designs and old stock video imagery from the Tour de France race. This was the only song, along with “Planet of Visions” stemming from this millennium.  “Radioactivity” which was sung in Japanese in parts, it had Hiroshima replaced by Fukushima in the projections sometimes. Also the lyrics had been changed to include lines about the recent nuclear disaster. Most of the lyrics were projected in Japanese.

The low point of the performance for me was when someone managed to enter the stage and started dancing during “Trans-Europe Express”. Such a shame for the organizers and security crew, to rub it in even further it appeared to be one of Kraftwerk’s own security personnel who removed the idiot. Pure luck is was only a dancing idiot and not a psychopath threatening the performance.

Roughly 90 minutes after they entered stage the left the stage one by one, leaving Mr. Hütter to play the final string section of “Music Non Stop” by himself and address the audience for the first time saying: “Good Night. Auf Wiedersehen.” The 27 000 others and I left Slottsskogen and I at least wondered if this could ever be topped. If you have the opportunity to see them please do go ahead, it is not a conventional concert, it is Kraftwerk.