The backbone of two of the biggest real indie acts in Sweden, Yvonne and Strip Music, disappeared and were nowhere to be found for a couple of years. Now Henric de la Cour is back with his new project. And this time he’s on his own, well… almost.

The self titled debut album has been out for a couple of weeks and Henric de la Cour is currently promoting it and doing some full blown theatrical live shows on a regular basis. We had a chat with him about the album, about being an indie role model, about the writing process and about the awfulness of happy songs.

This album is released as a solo album with your own name on it. Does this mean that there are no compromises anymore?

- In a way yes, but I still have Rikard Lindh around who is a big part of the process. He’s the one helping me to sort out the ideas and develop my demos into real arrangements. He can stop me whenever I seem to lose track. But apart from that aspect it feels really great to have a band with only myself.

So, is this the ”real” sound of Henric de la Cour that always existed or something developed over the years? Was there initially a statement not to be as bombastic as in e.g. Strip Music and head for more minimal arrangements instead?

- Yes, in fact there was. This simply was what I wanted to do. I wanted to produce an electronic album since it is much simpler in some ways. I didn’t feel like spending lots of time rehearsing songs. When you create electronic music the tracks are finished quicker, more ore less as you write them.

And how did you create your demos?

- I wrote the songs on either guitar or on a keyboard. Then I went to the studio and presented them to Rikard and then we took it from there. It was in fact a very simple process and we actually began by discussing how the music should sound and what I was aiming at. This discussion went on for a while but once we’d finished ”Dogs” we knew exactly what we wanted.

So you could say that this track was used as a kind of a template?

- Well, the idea right from the start was to achieve something really different to Strip Music by trying to use as few sounds as possible.

But how could you tell when a track was ready? Many artists would agree that it takes a lot of discipline not to overwork the production. How did you keep yourselves from fiddling too much or putting in more and more sonic elements into the mix?

- We had to balance this all the time. After all, we still didn’t want to make a boring record. This is one of the parts where Rikard’s input was of great importance. He is much better at tweaking and trying out different things and different details. In the end we still always seemed to be able to hear whenever a track was ready. This actually was a very easy album to create!

This sound a bit like a myth or perhaps some kind of a PR stunt, Henric – too good to be true… 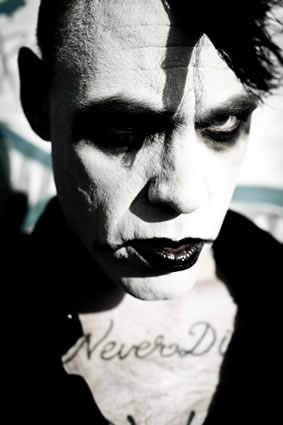 Co-worker in the shadows

Do you have any details regarding any of the songs on the album that you’d like to share with us?

- The last song on the album, ”Clinic”, was originally only based on a repeated piano riff and I was totally convinced that that should be the only arrangement on that track. Rikard just looked at me like I had totally lost it. He just thought it sounded insane. But I insisted that the tune should only contain vocals and the piano sequence. However, about a week later Rikard approached me with a new version that he had produced on his own when I had left the studio. This was a full version with strings and everything and I thought ”Oh shit, this is really, really good!”. So, in the end, this track didn’t turn out like I originally wanted but I am very happy that he wouldn’t listen to me.

He wouldn’t have been allowed if you where around?

- No, because I was totally convinced that the song was already finished.

This really shows that he knows you. After all, you’ve known each other for ages…

- Yes, he knows me very, very well when it comes to music but also everything else. Of course, a decade had passed since we last worked together in Yvonne. During this time we’d both, obviously, changed and developed as human beings but once we started working again everything felt right, from the very beginning. Then again, Rikard has been around helping me recording some Strip Music demos. With this record I wanted him so much more involved, to be the other part so to speak. And, to be honest, he’s been working really hard on this record. Much harder than me, actually (laughters). 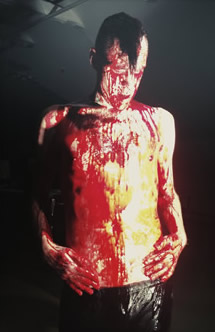 I have a question regarding the lyrics. You’ve always been writing very personal lyrics but on this album I feel like some of the songs have a theme that seems to be a bit less specific and more general. Am I completely wrong? I got a feeling that the lyrics for ”Dracula” might have been inspired by you being a part of a musical setup of ”A Nightmare Before Christmas”… Have you consciously tried playing a part within the songs on this new release?

- Good question. ”Hollywood and Wolfman” was definitely the most personal album when it comes to lyrics. On the new album I feel that all the songs are dealing with resignations in different forms. But this may not have been intentional since many of the lyrics originally were put on the tracks rather spontaneously in the studio just to give Rikard a general idea of what the phrasing would be like in the songs. After a while you notice that these lyrics sound good and you decide to use them. This follows the overall procedure of this album. A lot of things were just done right away and on the spot. Still I think some of my better lyrics are on this release and they all have the same goodbye theme.

I’d like to ask you about references or tributes to other artists in your lyrics. You’ve used words like “starblood” and the first lines in “80s” you’ve borrowed from Simon & Garfunkel. Any comment?

- Well, this happens every now and then. “80s” was a good example of me just singing whatever came to mind in order to give the producer a hint of what the phrasing will be like in the end and I used the Simon & Garfunkel lyrics since they fit in so well. When I later noticed where the rest of my lyrics for that song were heading I let the first lines stay like this. Starblood was just a cool word.

Speaking of you being “in a musical”, this definitely gave you all the excuses you’d ever need to put on serious amounts of makeup. I know that every journalist has been nagging you about this but still I have to ask. Was it this that gave you the final confidence to use this live or did you always want to but never given the permission by your former band members?

- No, I’ve always been able to express everything and anything I want and need on stage but this time it is more of everything. A reason for that is that if you present electronic music live with only two people on stage you need something to make the show a bit more interesting for the audience. The visual part is very important to me. When performing with a six-piece rock band, like with Strip Music, there were lots of people on stage and people would always have something fun to look at. But now when we’re a couple of dudes above the age of 35 simply standing behind a tiny keyboard wont cut it. I try to create something somewhat more artistic with very small measures and… well, blood and makeup is cool in the end anyway, right?

Of course it is! How do you consider this when compared to other indie artists? Many seem to go the quite opposite way, trying to look as normal as possible. Some bands seem to wear the same clothes on stage as when they’re rehearsing. Do you think they’re boring cowards?

- I can fully understand their aspect but that is not the way I’d like to perform. Already when I started I tried to do something more visually interesting and now I thought it was time to do it without any limits. 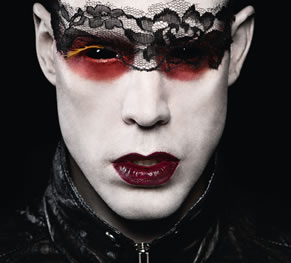 You’ve been a part of the Swedish indie scene for quite some time now. How do you feel that your image and identity changed over time? Are they still the same?

- I have to say that I feel that my image has stayed quite the same over the years, for better or worse. I think that I sometimes receive more crap simply for just being me. Some critics may actually think my record deserves a 3 but gives it a 2 in the end just because it’s me. Maybe they think I’m too pretentious or whatever.

But, if one is not allowed to be a bit pretentious – then what could you possibly ever dare to do?

- Exactly, for me the darkness in music is by far the most important thing. Darkness and desperation, these two elements are making it worth the effort. I understand that there are bands not agreeing with this and I’m so glad they exist because then everybody complaining about me can listen to their music.

I think David Bowie once said that there’s nothing worse than a 45-year-old man strumming his guitar, singing about how happy he is. Do you feel the same?

- Yeah, that is totally unlistenable, I simply cannot relate to something like that.

I’m quite sure probably most of our readers are with you on that point. What to you think will happen now? Do you consider yourself as a new role model for the next generation of electronic musicians? For quite some time many kids have bent over laptops and the only stage gimmicks are some really expensive headphones. Are you here to inspire them to show off a bit more?

- Honestly I don’t know but let’s face it – I am far from an Ola Salo in the end. He and The Ark went really far with the whole stage thing.

But they had no blood, Henric!

- Well, I’m aiming for something tougher and darker – much, much darker.