Franck Hueso is on tour under his alter ego Carpenter Brut and with his new album “Leather Teeth”. The king of syntwave returns to the stage with an astonishing live show coated in a dazzling mix of 80:s horror film clips, harsh electronic synth lines and with metalhead attitude. Release spoke with the mythical French synthwave star about his roots on the metal scene, to reach the Nine Inch Nails level of live shows and following the DIY path.

Much has happened since Carpenter Brut released the much appraised debut album “Trilogy” in 2015 and quickly became the rising star on the synthwave scene. His unusual live shows proved that synthwave artists didn’t have to depend on boring laptop shows. The mysteries surrounding Carpenter Brut have for sure contributed to create a myth about Franck Hueso himself and enhanced the curiosity among fans.

You’ve just released a new album, “Leather Teeth”, almost three years after your last album, or compilation of EP:s depending on how you look at it, the “Trilogy” album. Save for the single release of “Night Stalker” and a live album, what has happened with Carpenter Brut during this three-year period of silence?

- I’ve been on the road since 2015. We play many venues and festivals around the world and it left me very little time to compose or collaborate with other artists or bands. To compose I need the most total serenity. I can’t see myself composing on tour, I need to have enough concentration to do my work well.

How would you say that “Leather Teeth” has been a development and differ from “Trilogy”?

- “Leather Teeth” is an extension of my previous EP:s while remaining different from them. It may sound paradoxical but I wanted to move on to another theme than those already mentioned with “EPI”, “EPII” and “EPIII” – the “Trilogy” album – while keeping the “CB touch”. “Leather Teeth”, which is part one of my new “Trilogy”, also tells the genesis of Bret Halford’s story (see below), so we had to give it a softer and more glamorous atmosphere while flirting with a dark side that will be developed in the next album. I also wanted to switch to softer music because I was tired of this race with whoever makes the darkest or most brutal music, it’s just bullshit. I like to go where I want, not where I’m expected to. I like to think that I can do what I want without having to answer to anyone.

Speaking of the “Leather Teeth” album; once again you use different vocalists, this time Kristoffer Rygg of Ulver and Mat McNerney of, for instance, Grave Pleasure. Previously you worked with Franky Cadillac on “The Good Old Call” and Jean-Marie Paillard on “Anarchy Road”. What is the story of using different vocalists and, in particular, vocalists from quite different musical backgrounds?

- The idea is to experiment and try new singers. I don’t really have a particular approach when I ask a singer to take part in my music, I’m more of a “fan” – if I like their voice and it can fit in with my music then I ask them for a collaboration. Having Kristoffer Rygg on my album was like a dream come true because I’ve admired his work in Arcturus and Ulver for such a long time. As for Mat, we wanted to work together for a while and so it was a natural step that he put his voice on my new album.

Using vocalists also give music a new dimension because it’s easier to remember lyrics. Is there any plan to use more vocalists in the future or do you prefer to stay instrumental which is more common in the synthwave genre?

- As long as I can collaborate with singers whose work I admire, I will continue to compose songs. 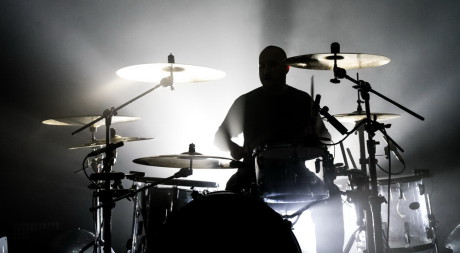 Carpenter Brut’s success may to a certain point be the result of the much successful French electronic scene. In the 1990:s French music was rarely associated with electronic music genres, rather you would find references to Edith Piaf, Serge Gainsbourg and, for electronic fans, new age artist Jean-Michel Jarre. Laurent Garnier, the techno producer, was one of very few international French artists on the popular music scene until Daft Punk’s debut album “Homework” in 1997 and Mr Oizo’s super hit “Flat Beat” in 1999, but the 2000:s saw the rise of a wide range of international electronic bands and artists with French origin such as Justice, Sebastian and Kavinsky.

If you look at Carpenter Brut from a bigger perspective, on the French electronic scene which completely exploded on the international scene in the beginning of the 2000:s, save for Daft Punk and Laurent Garnier that have been around for a while. Few people associated France with harsh electronic beats but the 2000:s have seen the rise of bands like Justice, Sebastian, Toxic Avenger, Busy P, Kavinsky and quite many other bands associated with cult label Ed Banger. Why do you think the electronic music scene became the beacon of French music at an international level?

- I have no idea, maybe because we French are not good at rock music? We had to improvise and look for another musical genre to emancipate us and create a savoir-faire since rock and pop is not what we do the best. Wasn’t it John Lennon who said “French rock is like English wine”?

I’ve read that you have been inspired by bands such as Justice and American director John Carpenter’s music but also some rock/metal bands you grew up with, for instance Iron Maiden. It seems that many synthwave artists have a background in the metal scene such as Perturbator. How do think this mix of musical backgrounds and genres affect which kind of fans that turn up at your shows or buy/listen to your albums?

- I assume that my musical background as a metalhead is felt in the way I compose my music but also in my artworks. Besides, my artworks are not really in the synthwave cliché and the rare times when I used its codes, I added a morbid element like a guy hanging from a palm tree [Carpenter Vice T-shirt]. At my shows there is this mix of people that you can find in my music, a kind of crossover between metal/electro/horror films/video games sounds. At the shows there’s this happy mess; people moving and dancing together when they, individually, are not part of the same scene. 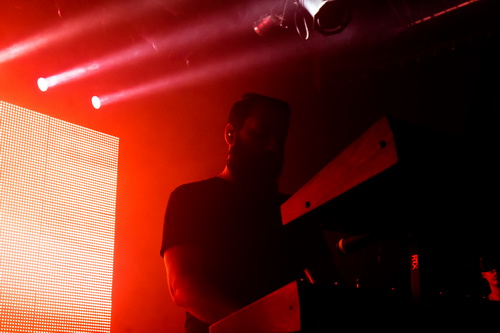 DIY attitude: “Being independent is the best solution”

You have performed in such different music contexts – metal, electronic and experimental music festivals such as Roadburn – and must know where Carpenter Brut’s music work best. Where is your crowd?

- I would say that globally my public is in the metal scene but it would be necessary to make a poll to be sure of it (laugh).

Speaking of touring; you seem to put much effort into combining rather expensive onstage elements considering the digital backdrop, cut and paste of videos and so forth. A journalist even described you, based on your live shows, as the synthwave equivalent to Jean-Michel Jarre. How do you work with the visual aspect of Carpenter Brut, to express yourself visually rather than musically?

- “Synthwave equivalent to Jean-Michel Jarre”! Wow, I’d love to! (laugh) Where did you read that? I didn’t see that! (laugh). At the very beginning of Carpenter Brut I personally financed the live shows, then No Quarter Prod took over. I think it’s important as an artist to get involved in your live shows, it’s as important as composition. Finding a visual identity both in your music and in live shows is essential. It would be a pity to favour one and abandon the other. My music is quite cinematic, we had to reproduce it live and that’s why, beyond having musicians on stage and a light creation, we also added video. At least the audience can enjoy everything that happens on stage – the musicians, hypnotic lights and then the video that crowns it all. It still requires work and financial means but I like to think that we will get to something à la Nine Inch Nails. But for now it’s just a dream (laugh). 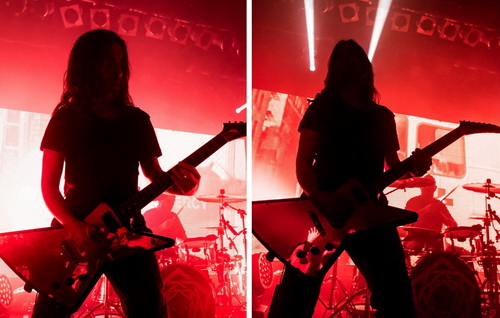 Your latest releases are on your own label No Quarter meaning that you are using the do-it-yourself (DIY) method. There is of course many pros and cons of going DIY and one of the cons that other artists mention is that you need to see yourself as a business person since much time is allocated to administrative tasks rather than putting all your effort into studio work. What is your take on that?

- I think signing on a label just because you’re afraid to deal with the administrative and/or financial tasks is bullshit. No Quarter Prod finances 100% Carpenter Brut and I’m not sure that signing on a label would be the same deal. I think that not depending on anyone is the freedom of creation and movement, you don’t owe anyone except yourself.

No Quarter Prod is two people – my wife and me. I handle the artistic taks and live shows and she manages everything else. We trust each other and we know where we’re going. Carpenter Brut is self-financed and we do what we want in terms of merchandising, video clips, promotion etc – this independence is dear to us. It’s better than begging for money from your label to finance this or that project and wait for them to answer you. I don’t have the patience or the desire for that. So no, definitely, signing on another label than mine – no way.

Is DIY the way – combined with frequent touring – to create a sustainable music career in terms of economy? I mean, the music industry has changed completely since the record label era ended in the 90:s and music became digitized.

- Ideally being independent is the best solution; you have a transparent and direct view on your sales and you don’t need to wait centuries before receiving the money from your work. This money allows you to finance your other releases or projects, your live shows and many other things. So yes, in a world today where people consume more and more digital music and where artists can put their music available on digital platforms, if you can avoid having three million intermediaries before you can enjoy your work financially and live your passion, yes definitely it’s better to go DIY.

The Bret Halford story:
This is the story of Bret Halford, an introverted science student. He likes a girl who doesn’t like him and much prefers the team’s star quarterback. Bret gets mad. He tries to create a concoction that will allow him to control them all, but ends up disfigured and decides to become a rock star instead. This is how he will seduce the Girl, and all other girls: by becoming Leather Teeth, singer of Leather Patrol.