There’s a new chapter in the Alliance of Sound tour story every day now and today’s chapter is spectacular.

This was what Leeb told Release’s Johan Carlsson in the summer of 2013:

- I thought it would be a good idea, because of our connection, the fans and the history. For North America it would be a great “Monsters of Industrial” sort of thing. I wouldn’t mind going on first and doing a shorter set. It’s just being part of it, bringing back the whole thing…from before Wax Trax, before everything, right? We’re all for it. I just really like the idea of after 25 years just coming together, you know? A great way to close an era, and start a new one. I have my fingers crossed, I think it would be fun. It’s guys I used to be really great friends with, and hung out together with for a long time, so it would be like a “Familientreffen”. I think the fans would like it too. Sometimes you have to dream big. If you dream small, you stay small.

- You could bring out everyone and do some Cyberaktif songs!

And in a News piece from 2013 we wrote: “Nivek Ogre has said in a couple of fresh interviews that he has chatted with Bill Leeb on Facebook about a possible joint Skinny Puppy and Front Line Assembly tour”.

Haujobb launched a crowdfunding campaign to cover some of their expenses for the tour and has already raised €3185 (the goal was €3000).

The Alliance of Sound tour is now called Eye vs Spy. 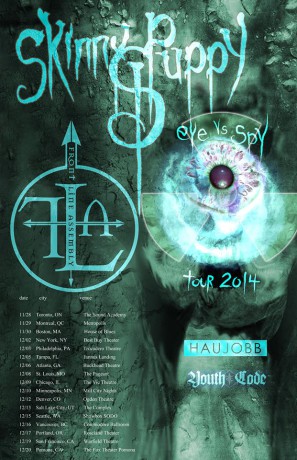