Amphi festival – interview about the scene, the past, present and future

The gigantic black celebration that is Amphi Festival in Cologne is one of the most impressive and popular festivals for our music scene – and I am still excited after this year’s Amphi. Here is a long interview with the organizers about many interesting matters, for instance the state of the scene, the audience, why Amphi moves to a new festival ground, the lack of newcomers and what happened at this year’s fest.

In August, Amphi announced that the festival will be relocated to the modern Lanxess Arena area. It’s just a few blocks away and visitors can use the same train station, trams, hotels and so forth. Elmar Herrmann from Amphi explains:

- The new arena is one of the biggest and most sophisticated indoor venues in Europe. It’s incredibly huge with lots of seats, that holds the entire Amphi crowd at the same time, independent from outside weather conditions. Further plans for 2015 include an open air stage, an outdoor merchant gallery, the visitor café, a special stage for acoustic performances, readings and perhaps a few lesser known bands. 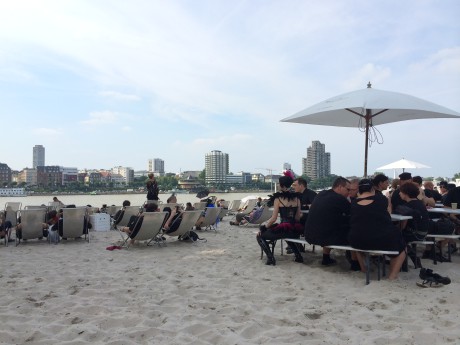 The previous festival ground, the compact Tanzbrunnen, with its beach club, outdoor stage roofs and indoor market was a really good setting; not perfect though. It gets incredibly hot in the Staatenhaus and almost difficult to breath at times. I experienced this during several concerts this year: The Neon Judgement, The Klinik, Rotersand and Aesthetic Perfection to name but a few. These were all great gigs and the more people and the more movement and dancing, the worse the situation gets.

- After 9 years at the Tanzbrunnen this might be regarded as a radical move, but the Tanzbrunnen and especially the neighboring indoor stage Staatenhaus revealed increasing shortcomings we could not ignore for the future of our festival. The pricing of drinks and food was one of the reasons for us to leave the Tanzbrunnen after such a long time. The Lanxess arena and the area outside offer a lot of advantages and space for future expansion of our service like more food stalls and better pricing, Elmar Herrmann promises. 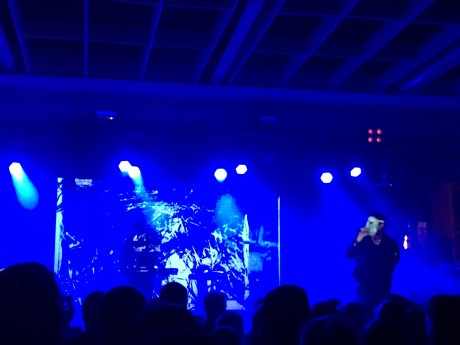 Six of the Amphi festivals have been sold out, including this one, the 10th.

- 16 000 people from all over the world came to Cologne. 16 000 was our capacity limit so far and the festival was sold out. On top there are roughly estimated about 350-400 people behind the scenes, involved in the production, security and the venue´s gastronomy team. About 20% of the complete audience come from abroad and they travel from all over the world. We had beautiful weather conditions that got everybody in a good mood and the festival proceeded very smoothly, except for the hiccups that occurred through technical problems everybody came to notice. Especially during the show of Front 242, which was a bit of a shame for the audience that was looking forward to it.

How do you compare this year’s Amphi to previous years’?

- In a way Amphi 2014 was the sum of all previous Amphis. Our best-of album, including the greatest hits with a few unreleased and exclusive tracks (in terms of artists that haven’t played at Amphi before).

- There are a lot of young people who enjoy modern acts in the scene but the average age is around 30 years or even higher.

The audience is more mixed in Germany than in Sweden, but there are almost exclusively men in the live acts…

- Yes, most of the artists at Amphi are male. Strange isn’t it? In fact this stands in relation with the band wishlists our visitors send us after the festival. However the gender of the audience is completely mixed at a balance of 50/50. 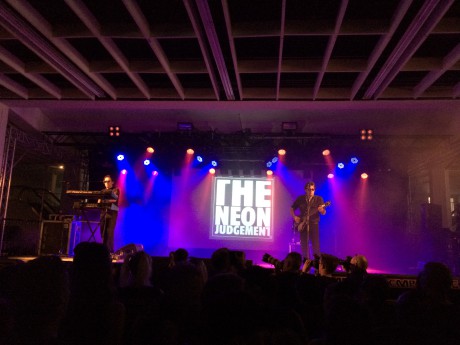 There are few new artists on Amphi, so I asked Elmar if Amphi thinks there are enough of them – that can draw a substantial audience – to book?

- That’s actually a difficult matter. As a big festival with a large audience and limited spots for acts you have to be extremely careful about the selection of new bands as to bands in general. That’s why uprising artists usually have a hard time getting into the line-up. The quantity of new artists is not a problem. It’s more a quality matter. There are certain indicators that help to identify potentially successful newcomers. But the group of bands that match these criteria and succeed to live up to them is too small, to affect festival line-ups to a larger extent.

How many Amphi artists are connected to Amphi and your booking agency Protain, by contracts and deals?

- Amphi Festival and the artist roster of Protain Concerts are basically 2 separate fields. While most bands of our Protain roster are related to the same scene as the Amphi Festival it’s inevitable to have at least some of them in the festival line-up. That’s the connection between those 2 sides and is related to what fits the concept. 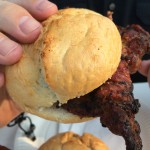 The scene – past and present

After visiting Amphi the “scene” you leave with the impression it is large, healthy and vibrant, although the majority of the bands (and visitors) are veterans.

- The scene is always in motion – constantly absorbing new streams and styles. The variety of what’s gothic has widened a lot in the past 10-15 years. Apart from the so-called „weekend goths“ that take on the style to break away from everyday life the „scene“ itself consists of a lot of people who understand it as a lifestyle or a general feeling they have in their lives. That´s why most people, who got in touch with the scene once, stick with it. If you look at the audience of the festival it’s apparent, that many of them have grown older as goths and it has become like a second family. When you visit goth festivals in general you will remember many faces after a while.

- Based on public exposure, like on TV and other channels, the goth scene has become more transparent and accepted – at least from what we experience in Germany. Festivals like ours support this development. They provide a door for people who are curious about the scene and let them catch a glimpse of the spirit and the excitement. As the scene is very open to everything, many people come as strangers and when they leave, they are dyed in black so to speak. 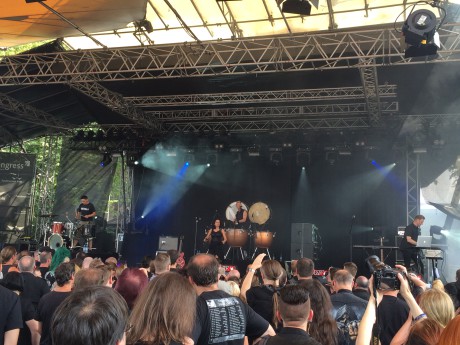 In the Nursery on the main stage.

Have you noticed any new trends or shifts in the taste of the audience?

- Sometimes it happens in form of a new influence that simply appears and becomes a new trend. Other times the balance between electronic music, like EBM/industrial, and gothic/wave shifts from one side to the other. A couple of years ago the cyber-gothic movement appeared, at another time people were more into the victorian styles or steampunk and right now we have an emerging group that favours and reinvents post-punk for a new generation.

From our perspective (working with the scene outside Germany), it seems like parts of the German goth and dark audience was a little bit more introvert, tense and single-minded in the past. Now we see more people smiling when passing by someone and enjoying themselves, being more relaxed, being active at the concerts – things like that. Do you agree? If so, is it because they are older now, influenced by how people behave in other countries like Sweden, the UK or USA or can you think of other reasons?

- Maybe the character of the scene has changed. Like all things change from new influences. Being a goth has become more accepted in the past years and so the goth scene opened itself as well to new influences. Maybe that´s one reason. But basically people always knew how to celebrate their community in style. Everything is in motion…

„Everyone“ is at Amphi and the competition is tough. For the artists, it’s not your average festival gig – all artists I watched live really tried to do their best and many brought stage props, dancers and guests to the stage.

-  It was plain to see that many of the artists took the opportunity to show their fans something special, like Eisbrecher, who appeared with a new live-show and a special stage design. Also it was very touching to see how a rather unexpected artist for a goth festival like Midge Ure was celebrated as one of the highlights or a death-comedy act like Der Tod went through the roof of the Theater Stage.

The Amphi river cruise concept is not new but this year a second trip, with another ship, was added.

- We started on Friday with a trip on the Rhine, with Project Pitchfork and Agonoize. It was a unique experience for everyone involved. The festival closure, again on a ship, had an enormous impact on everyone attending. The classical and acoustic performances by Ronan Harris – VNV Classical, Solar Fake with guest Peter Heppner, and Sonja Kraushofer moved the audience to tears. The Rhine cruise will return in 2015. It’s too early to talk about details but it will take place on Friday 24th July 2015 onboard MS RheinEnergie. The second cruise was an anniversary special only and shall not be repeated next year, Elmar says.

Front 242 probably just want to forget about their performance…

- They decided to use their own digital mixing board for the show and it broke down at the worst possible moment, 6 minutes into the show. So our crew patched the entire channeling to our own mixing board to save at least part of the show.

Front 242 expressed their annoyment on stage – almost lost their temper entirely – but returned after a long break for a shortened set. They have apologized for the technical issues and will return with a full show next year. 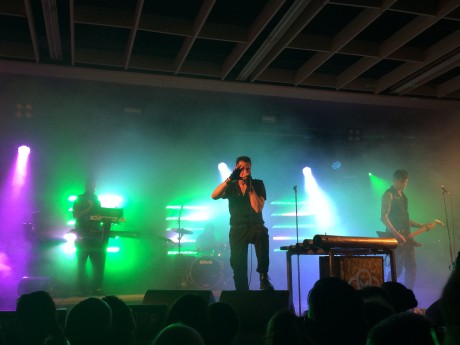 Die Krupps did not have the pressure of being a headliner on the main stage in front of over 10 000 people so when their concert also was halted for a long time, they remained on stage and in a good mood. Frontman Jürgen Engler joked, smiled, sang, used the Stahlofon and suggested that the audience asked questions. Die Krupps’ equipment arrived shortly before the concert, after being flown to the wrong airport and then taken by car to Amphi shortly before the show.

- It was also a problem with the band’s equipment, Elmar says. The click signal that supports the drummer to maintain correct speed did not get through the monitor due to a misconfiguration of the band’s rack. Jürgen Engler told the audience that the monitoring wasn’t working. I guess he chose the easy way to describe the problem as to make it as plausible as possible for the fans, but technically it was wrong. The monitors worked. After a short break the click and also some stuttering backing tracks were brought to life and the show went on. Things like these happen from time to time.

Die Krupps have a different version of what happened:

- It is not true that the technical issues we had were related to our equipment, as stated by Amphi. The reason why we had to stop the show was because our monitors were not turned on, and our drummer didn’t have the click track on his in ear monitors, because the monitor guy simply forgot to connect the cable.

The important thing is that the concert was successful in the end.

The 11th Amphi takes place on July 25-26, 2015. Parts of the 2015 program have already been released and the headliners list include VNV Nation, Front 242, Agonoize, DAF, Diary of Dreams, S.P.O.C.K, The Mission, Welle:Erdball, Patenbrigade Wolff, Qntal, Rabia Sorda, The Crüxshadows, Neuroticfish and Zeraphine.