A few days ago a poster appeared spurring rumors of the return of the JAMS. This is one of numerous aliases used by masterminds and tricksters James Cauty and Bill Drummond, perhaps most known as the KLF.

It has been 23 years (the rule of five) since they announced a contractual hiatus from the music business, although they have produced music since then. Whether or not there will be a new musical project, or something completely different, remains to be revealed on August 23 2017.

On a personal note: I am pretty certain they are up to something, 23 years after the burning of a million pounds in a boat house on Jura – and their subsequent contract, written on the roof of a rental car and pushed over a cliff, is too important to be forgotten. I doubt they will use their KLF alias. Using their JAMS and K2 Plant Hire Ltd. alias, as used for their response to the Turner prize, makes sense, they thereby say nothing regarding the nature of their current work. 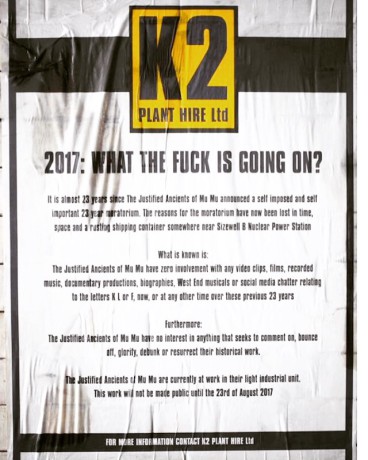