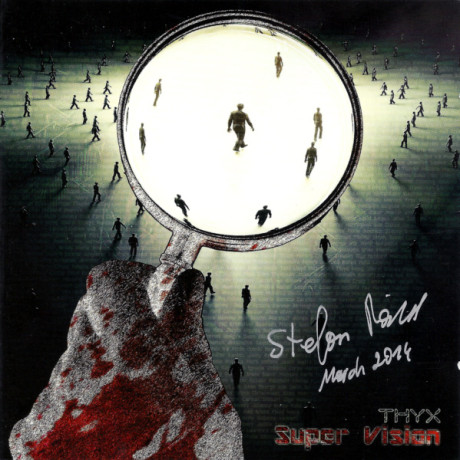 Less than a year after his last Thyx adventure, Austrian electronic music wizard Stefan Poiss (Mind.in.a.box) is back to serve us more sinister electronics. “Super Vision” may not be a revelation in any sense, but the Thyx formula is strong enough to still be intriguing.

As an avid horror movie fan, I believe the Poiss approach speaks to me in particular. Most tracks have a distinctly creepy atmosphere giving them a whole new dimension sound-wise. Vocally, Stefan still wanders from untouched whispering to detached robotic vocoders, the latter of which further enhances the feel of unease. “Robots Don’t Lie”, the album highpoint, uses this brilliantly. Other tracks have a tendency to lose focus, tied too hard to mood as opposed to melody and drive.

Thyx, while still retaining uniqueness and artistic flair, may want to step away from the beaten path on future endeavours. Not because he has to, but because I know he has the skills to do it succesfully.