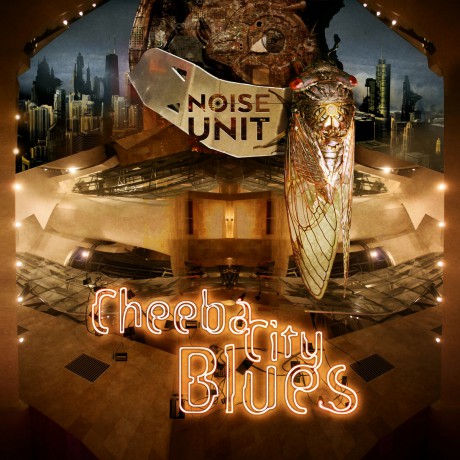 Chiba is a city in Japan which is also featured in the ”Neuromancer” trilogy by William Gibson, the trendsetting cyberpunk story that has inspired so many. Including Bill Leeb presumably, who was well into cyberpunky stuff back in the 90:s around the “Tactical Neural Implant” era. Now, the title of this new Noise Unit album is also a play on words as “cheeba” apparently is slang for weed. Weed and cyberpunk is a pretty apt description for this weird album.

Not much info has been given about the album, even the press release is pretty thin, but I know the late Jeremy Inkel and Bill Leeb were rumoured to have started writing some Noise Unit material several years ago. Nothing came of it, except some of that turned into tracks on the first “Warmech” soundtrack. My guess is that the songs on “Cheeba City Blues” are leftover tracks from those sessions, because they all have an unfinished, fragmented feel to them, and they are wildly disparate in style. Some dub, some instrumental, some melodic, some… weird. Actually, this makes it fit remarkably well with the whole cyberpunk aesthetic.

In the end though, I think this album is perhaps more interesting than great, even though there are some really awesome stuff on here. Bill’s vocals are entering new territory, and sometimes they’re almost clean. Check out the synthpoppy “Alone Again” for an example of that. Then listen to “Heal All Wounds” which captures some of the old school Noise Unit magic with its wild drums and heavy atmospheres. I think “Cheeba City Blues” fits the Noise Unit moniker in that it has been used previously to put out leftover material from other sessions. Such as when Bill and Rhys recorded a follow-up to “Tactical Neural Implant” but ultimately decided to base “Decoder” by Noise Unit on it, and strapped on their guitars for “Millennium” instead.

The most remarkable thing about it though, is that it’s probably the last Inkel material to be released, since Jeremy sadly passed away way too early back in 2018. It’s a stark reminder of how pivotal Jeremy was for the bands sound on the later albums, especially on one of FLA:s best albums “Echogenetic”. RIP Jeremy, it seemed you were only getting started.

“Cheeba City Blues” contains no hits or stone cold classics to bring many new fans in, but it definitely is one for the collectors. I’m eagerly awaiting my vinyl. There’s beautiful artwork by Dave McKean as is tradition, even though it’s not one of his stronger works.