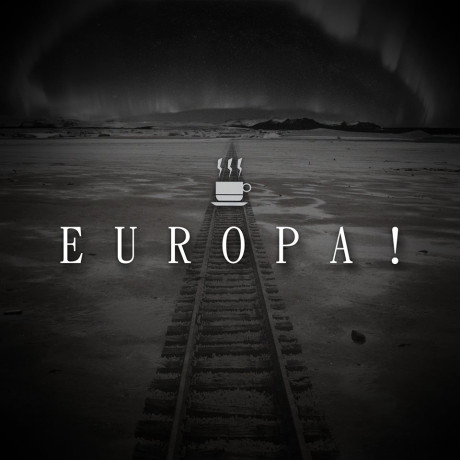 Has it been 10 years? Impossible, I’m still young and handsome, as are the boys in Sturm Café that are now here with the second album since “So seelich, so schön!” from 2005. They have quit the band, reformed to play live, released a 7” single, but they are back or real and with a bang in the form of “Europa!”. The album is, just like the last single, released by the band themselves, this time both on CD and as a limited double-LP (the later one with a bonus remix from Thomas P. Heckmann).

The first album had a steady base in EBM, with some NDW influences that I really enjoyed. This album is slightly more towards pop and for me, that pop element is  why I have stayed with Sturm Café for so long. They have a unique sound in a genre where too much is about hard beats and image, lacking in songwriting. Sturm Café don’t, they try to create something new, with a firm grip of how things was done in the past (they use an Atari for sequencing and mastered everything on 2″ tape).

“Sicherheit” is my favourite track on here, it’s very powerful but at the same time have that popfeeling attached to it that makes it very accessible. The title track is also strong and almost has a Laibach-esque feeling in all it’s bombastic glory. “Kaufkraft” is a majestic, slow EBM-track with good lyrics; ”Die Ende” is another favourite and we also get the very strong “Koka Kola Freiheit” that they released as a 7″ single some years ago.

I do feel at the album is a tad too long, not all of the tracks hold up to the same high standard. But overall this is a really strong album and I hope I don’t have to wait until 2025 for the next one.