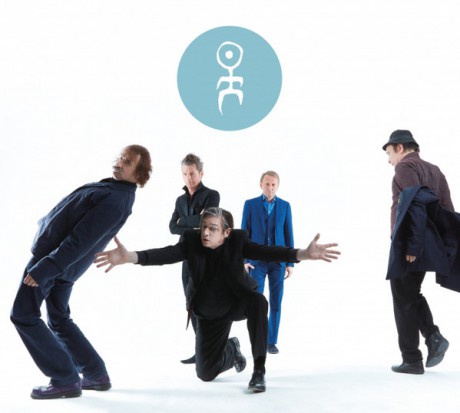 Einstürzende Neubauten celebrate their 40th anniversary by releasing a new studio album, the first one since 2014′s “Lament”. That was more of a concept album, so it’s actually been 13 years since the last studio album. Already back in 2002 they started to work with the concept of crowdfunding, allowing their fans to take a big part in the creative process. That is the case for this album also and you can tell that this is a way of working that is well suited for this band.

The new album is centered around the concept of Berlin, the city where everything started with a live gig at the Moon Club on April 1, 1980. Their sound has evolved through the years and those that are looking for metal banging chaos should look elsewhere – as has been the case with many albums. This is a calmer full-length that stays true to their heritage and, in a way, tells the history of the band. They have perfected their method of taking elements of the world around us, bringing them to the studio, cutting it up, putting it together again in a way that few, if any, can do.

I truly embraced Einstürzende Neubauten with the “Silence Is Sexy” album in 2000. For me, that still is an album that builds a lot on daring to slow down, allowing breaks, giving beats time to build up, creating a very organic sound. I hear a strong connection to that album here, where they allow beats and melodies to find their own space in the songs. The title track “Alles in Allem” is a lovely example. Blixa Bargeld takes us on a journey and it’s a wonderful example of how he can create lyrics based on what he sees, including the floor of a corridor outside their studio.

“Zivilisatorisches Missgeschick” is perhaps the closest we get to the “old” Einstürzende Neubauten, with a fair share of metallic beats. It is not aggressive though, but very balanced and delicate. “Möbliertes Lied” is also a favourite of mine and I was not surprised to learn that this was the first song to be recorded for the album. You can sense an atmosphere of taking the first trembling steps into creating something new.

I also have to mention “Taschen”, where the band creates rhythms by playing on zippered bags of the kind much used by refugees to pack their belongings in. Together with lyrics like “What are you seeking in your dreams? / We seek nothing / We’re waiting” it’s an extremely strong track forcing us to reflect on the world we live in.

In “Wedding” the band travelled to five different coordinates in the Berlin district, all selected by chance of course, made field recordings there and used them in the song. A wonderful example on how to take the outside world into the studio and creating a new world with it, if only for four minutes and 26 seconds. “Seven Screws” is lovely poetry, that sparked a lot of questions among their supporters. The band gives no answers of course, and it is a song that the listener can interpret in their own way.

There are some things on here that does not really work for me, but the songwriting is really impressive. The album demands something from you as a listener, to be able to enter their world and reflect. But if you are ready to do that, you are rewarded with a great experience that will stick with you.