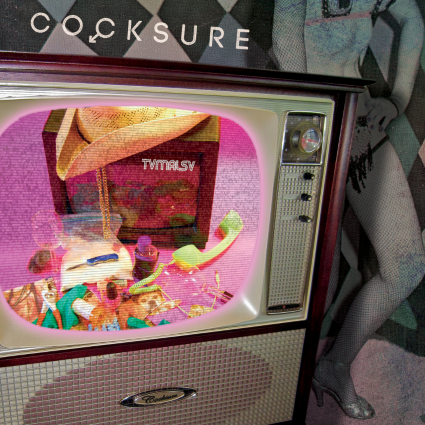 Cocksure is the new project from Chris Connelly (Revolting Cocks, Ministry, Pigface etc) and Jason Novak (DJ? Acucrack, Iron Lung Corp), which after 2 singles on Wax Trax! and CrackNation now release their debut album on Metropolis. Friends of Revolting Cocks will recognize the sound for sure: it’s brutal, dirty and industrial. Just the way we like it.

We start off with “Skeemy Gates” which is a perfect introduction to the project. We are thrown back to a time where the power in the music has nothing to do with speed; rather about brutal force. It’s a great hybrid of industrial rock with the electronic influence from EBM. I also really like the vocals from Chris Connelly.

“Drug-A-Bug” is another strong track and a personal favourite; but fans of the previous project will be curious about “TKO Mindfuck” where we get some guest vocals from Richard 23 (Front 242, Revolting Cocks); this is also the most electronic song on the album.

At first I was worried that this album would sound dated, and sure, it’s a musical genre that was popular in the 80:s and 90:s, but Cocksure manage to package this to fit into the sound of 2014 and adds a modern touch. For me this brings new life in a genre that I have dismissed for a long time. With some stronger single tracks this album would have been even better, but overall this is a really brutal and impressive debut.