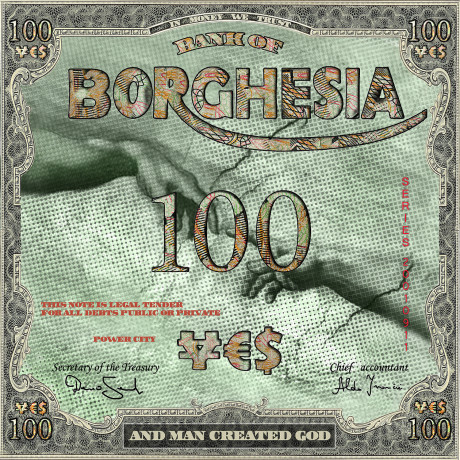 When you think about electronic acts from Slovenia, you will probably think about Laibach first, right? Well then I would like to remind you of Borghesia. They formed in 1982 and made quite a mark on the European EBM-scene some years later, the classic of course being “No Hope, No Fear” from 1987. They quit in 1995, reformed in 2009 and now the album is here.

“And Man Created God” is a political album which also makes me think of Laibach and their recent album “Spectre”. Already while listening to the first track “We Don’t Believe You” I realise that Borghesia in 2014 have taken a whole new musical approach. It’s a slow, quite soft track, not the hard EBM I was expecting. We get more of this softer side on tracks like “Kaufen macht frei – Buy Baby Buy” that almost has a muzak-feeling to it.

We get some harder tracks like “Too Much Is not Enough” but if you are expecting the classic hard Borghesia sound, this is not an album for you. I get the political aspect of the album, I understand the concept and you can’t misinterpret what they want to say. Like in “194” with the lyrics “Fuck USA – Enough! Enough!”, the problem for me is musically where it just becomes a big mish mash without a clear vision. It’s blends between different styles and it feels like the music is secondary to the concept, instead of being a combining force.

My favourite track is “Shoot at the Clock!” where the blend between the music, the vocals and samples from Slavoj Žižek work nicely together. More of this on the next album please!