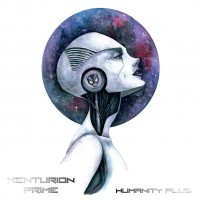 It’s been four years since Code 64 transformed into Xenturion Prime and released its debut album ”Mecha Rising” the year after. Judging by ”Humanity Plus”, the mecha is thoroughly risen now, and is rearing to go. Everything is bigger this time around. The melodies are catchier, the beats are heavier, the concepts grander. They’re taking on humanity itself, investigating how it can be more than it is. At least that’s my take on it.

Adding a third member in the form of vocalist Cathrine Räisänen Andersen perhaps enabled the band to broaden the spectrum. They have always flirted with other genres, but now they’re opening up even more. The trio is branching out into trance in ”Vimana” – the best trance track since Astral Projection’s heydays. They enter synthwave and IDM territory in the interspersed ”Artifact” series of tracks, which acts like breathers between all the heavy hitting powersynth stuff.

The album is a really a journey from start to end, and it sounds fantastic. Bjørn Marius Borg and Hasse Mattsson have always known how to wring the best out of their synthesizers, and continue to do so on ”Humanity Plus”. Production values are top notch, both crisp and heavy.

Following up a sublime dance banger like ”Vimana” with a soft piano laden ballad called ”Departed” takes guts, and is a great showcase of what kind of band this is. Not all tracks hit these high marks, but the average level is damn high.

Xenturion Prime have found a niche in ”powersynth”, where futurist science fiction ideas mingle with synthpop, EBM and techno. They’re going further and further into space, and I’ll gladly join them on their travels.