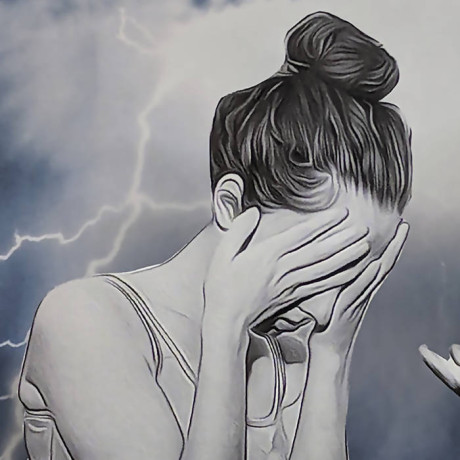 She Began to Cry Tears...

Venetian Snares can only make music like Venetian Snares. Like so few modern electronic artists, he has a sound that is all his own, and one that is instantly recognisable. Also, until relatively recently, he was extraordinarily prolific, releasing multiple albums a year not just under his own name, but various others too.

His latest release, with the incredibly long title “She Began to Cry Tears of Blood Which Became Little Brick Houses When They Hit the Ground”, is a Bandcamp release, which seems to be his preferred mode of output at the moment. The album, released on his birthday, also marks a return to form.

Recent albums have seemed to lack the edge of what once used to be devastating beats, bass and blipwork. This album does not. “They Watched Him Detonated on the Linoleum Twisting” has all the clangs and jittery beats you would expect, but it also has a jazzy airy vibe which runs under the surface.

The title track, revolves around space like echo whooshes, which then get broken and fragmented by what seem like a million beat crystals, pounding and cracking in every aural range – right channel, left channel, foreground… you name it, there is something going on there. It feels as though Mr Funk’s attention span is so short he has to cram in as many ideas as possible into a track so as not to forget them and therefore disappear forever.

“Eric and Kitty Both Die within A Month of Each Other, Red Stares at the Coffee Table” starts off like a malfunctioning R2D2 droid, then descends the soundscale until we reach grandfather clock chimes which repeat before dissolving into open sound spaces once more. Honestly, there is more imagination in one of these tracks than some artists manage in a full length album. “He Became a Crooked Steeple in a Dusty Old Snow Globe Nobody Had Turned over For Years” has to be one of my favourite titles for a song in a long time, and the track is as jumpy and jittery as ever. My second favourite title is my favourite track here. “Crazy Painted on Eyebrows Staring out the Front Window Eating Hot Dog Buns” relies on a scattergun cyclical beat approach, while other sounds dance and mimic what is going on in the space between the rhythm – it is captivating stuff.

Listening to Venetian Snares on form is like listening to a modern day genius at play. He can bend electronic instruments into sounds few would have believed even existed, and that is not to mention what he can do with a drum machine. This is not exactly the best he has produced when compared to his other output, but very few would find it easy to reach this standard either.