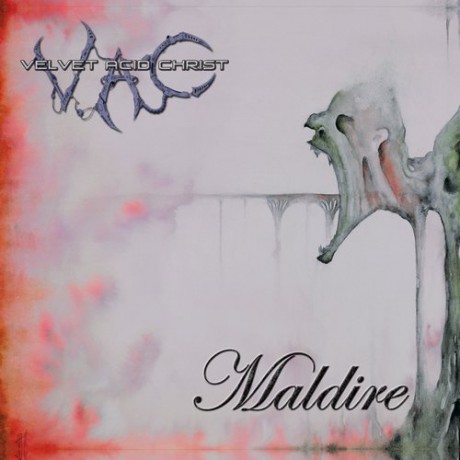 I’ve never been a huge fan of Velvet Acid Christ, and I thought Bryan Erickson made some pretty derivative hard electro back in the days. Imagine my surprise then, when I realized that his latest album “Maldire” is actually quite good! All my pet peeves are taken care of: It’s got variation, he’s not using “presets” or too overused sounds and there aren’t too many songs. Imagine a sort of mix of Haujobb, Skinny Puppy and modern EDM.

Most tracks fall into the more old school type of industrial, with lots of movie samples, heavy beats and lots of atmosphere. It’s off to a promising start already with the opening track “Evoked”, where distorted vocals play nicely together with a slow, grinding beat and sinister melodies. The next composition though is a pretty big surprise, where a slow clean beat drives a beautiful piano (sort of) melody forward, with brittle strings in the background. Who knew? Overall the standard is pretty high, although there are some duff tracks as well. A possible favourite is “Bend the Sky” which ups the tempo a bit, while maintaining the dark atmosphere levels. Or it might be “Hyper Curse” – a straight hi-nrg dance track.

I have reservations against the artwork which looks a bit like something a death metal band would come up with. But other than that I think that “Maldire” is a solid dark industrial album well worth checking out.