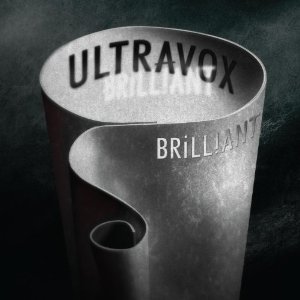 The creation of the new Ultravox album, aptly named “Brilliant”, was a bit of surprise to me. Not as much as the re-formation of the classic line-up during the “Return to Eden” tour a few years back, which surprised me on the same scale as the Yazoo “Reconnected” tour, but never the less, who would think that Midge Ure, Billie Currie, Chris Cross and Warren Cann Cross would write and record a dozen new tracks and release it, Ure having said that there would be no new material and the re-formation was solely for the tour. Well I didn’t expect it until some behind the scenes videos appeared on the “Brilliant” micro-site.

So expectations were high when I eagerly pressed play to hear the first mid-tempo track “Live Again” but instantly there it was, unmistakably Ultravox: the piano chords, looming strings, crisp drums, Ure’s guitar and fantastic vocals. Simply brilliant. It was like just like the 28 years since the last Ultravox album “Lament”, sporting this line-up, was released were non-existent and this was the natural follow-up. Ure, Currie and Cross recorded the album in Ure’s home in Canada. The drums were recorded in Los Angeles by Warren Cann.

The soundscape grows on the second track “Flow”, which boasts a U2 like guitar sound, into a more theatrical opus on a grander scale. The third track is the title track “Brilliant” – uptempo with distinct Ultravox trademark sounds but with almost whispered vocals until the big release in the chorus, I’m not totally convinced about the vocals in the verse but it grows on you (or on me at least). Next up is the slower “The Change” with some Kraftwerkish melody neatly hidden, followed by the faster “Rise”, before the first slow ballad “Remembering”. At this stage you sort of recognize the sounds and the album becomes a little bit predicable; still very well written and produced but it lacks variation somewhat. Apart from tempo, this is my only concern with the album.

It is like going to a Depeche Mode concert, at first you are very excited and after a few songs you get to the slower part until the grand finale. So it is with great satisfaction I hear track 10 “Let It Lie” and track 11 “Satellite” where things start to move again with a barrage of melodic parts. Along with “Live Again” these are my favorite tracks.

The last song is called “Contact” which is quite different compared to the others – slow and beautiful in a soundtrack kind of way. Complete with sad machines, whispering vocals and haunting strings leaving you with the final words “my friend” lingering, and it is. I think that this album will be a good friend of mine with the slight regret of wondering what might have been if they did not split and continued to make outstanding records, I sincerely hope that they will continue to release more friends. And that we don’t have to wait until 2040.