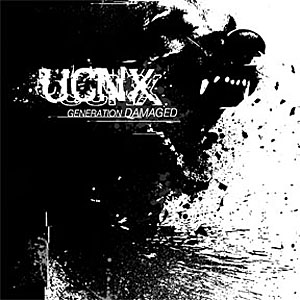 UCNX is a industrial outfit from New Jersey and Philadelphia, consisting of Doug Sudia and John Monette. A while ago they released the “Run Your Body” EP featuring a quite surprising (shocking?) mash-up of Nitzer Ebb’s “Let Your Body Learn” and Iron Maiden’s “Run to the Hills”. They have changed a bit since then though, and for this album they have concocted a potion of 90:s industrial, modern sounds and heavy beats. To my great joy the vocals are often “rock vocals” i.e “clean” without distortion, and that makes them a bit more interesting to listen to as they become more nuanced and dynamic.

The album opener and title track sounds almost like an industrial version of Fluke, the seminal 90:s techno band – and this is not a bad thing. The album then proceeds with a nice, even flow with no real stinker to be found. One track does stand out though, in a positive way – “Our Last Goodbye”, the odd one out where the rousing chorus, emotional vocals and catchy melodies elevates the song above the rest. Brilliant stuff. More please!

This is a fine collection of dancey industrial, and if you’re into for example Leather Strip (which they did a remix for) or the Wax Trax sound I think you might want to check this out. Some points off though for the production which is a bit messy and uneven.