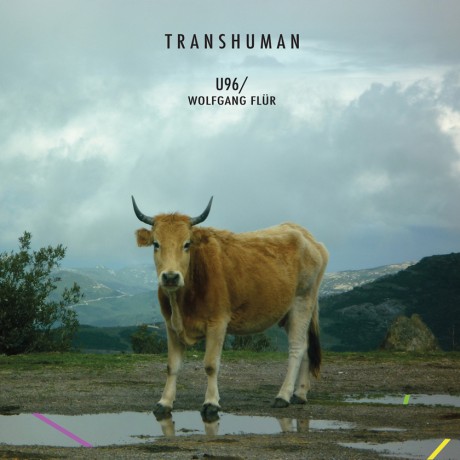 There is something very familiar on listening to the title track “Transhuman” – the DNA of those lovable German robots is all over the track. This doesn’t mean it is simply another Kraftwerk clone, rather that the influence of ex-Kraftwerk member Wolfgang Flür is notable.

Anyway, I don’t think this is particularly necessary, but some background. I’m sure there is no need to remind people of Kraftwerk, such is their footprint over not just electronic music, but modern music in general, so let’s concentrate on U96, the other part of this collaboration. You may already know of them too, especially if you grew up a raver in the late 80:s and early 90:s. They had a huge impact on rave and europop – especially with their track “Das Boot”. They also have strong ties to the newer incarnations to synthpoppers Boytronic. So how do you think bringing these two elements together might sound? Well, exactly as this album suggests – the feel of Kraftwerk, but with dips into the industrial techno spectrum, and then beyond into the unknown, and it is quite delighful.

There are many highlights across this inspired album. “Specimen” is one of the finest blends of that lovely early electronic structure, with a ravey driving rhythm and breakdowns. It’s the type of track you would lose yourself in a nightclub to. Previous to this “Zukunftsmusik (Radiophonique)” could have been a Kraftwerk track, which again shows how faithful to the ideals they have kept.

It is a great, great album, with some tracks following paths you would expect, but definitely some go off in directions away from the beaten path, and this for me is when things really get interesting. Both parties know their way around the structure of a track – and so end up creating music more than just the sum of their parts. Listen to “To the Limit” to see what I mean. This is not something you can equate to either side, but it is a fantastic track in its own right. “Zufallswelt” starts off quirkily, then turns a bit like something off “The Robots” album, before a driving bass rhythm comes in and takes the track to the dancefloor once more.

Top of the pile for me though is “Maschineraum”, which sounds like its straight off the streets of the “Blade Runner” movies, uptempo yet mournful. Then there is the first single “Let Yourself Go”, available here in two different versions – the original and the Beatsole Remix. Though I am not too fussed about the former, being a little too technopop for my liking, the latter pumps away, creating something a little more anthemic.

It’s not a perfect album by all means – “Planet in Fever” with all its heart-in-the-right-place lyrics about fake news and the climate crisis, isn’t that strong a track, while “Shifted Reality” made me think of “Tour de France” so much that I couldn’t get it out of my head while listening… But put this in the context of the generous 16 tracks on offer, and this is minor griping.

There were rumours that this album might be toured. I really hope it is, and I get to see it, as this is what the electronic world needs right now.