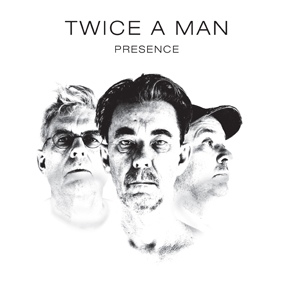 ”Presence” is a more of traditional Twice a Man album compared to 2012′s “Costume Area”. We are given nine tracks that balance between sound craftsmanship and the avantgarde pop formula that we all associate with this classic Gothenburg band. While this new release has more in common with the synthpop orientated, classic releases back in the early eighties, it is still somewhat edgier and more aggressive (if you can use such a word here).

It is the first with old member Jocke Söderqvist who rejoined the band in 2013 and he, Karl Gasleben, Dan Söderqvist (and guest vocalist Karin My) paint a dystopic image, based on current matters and environmental issues, which feels ambitious but sometimes a bit strained. And while the overall tone is rougher we’re still hang out in familiar Twice a Man neighborhoods. However, the overall avant-garde feel is overshadowed by a shimmer of routine that makes this collection of songs appear a bit too similar.