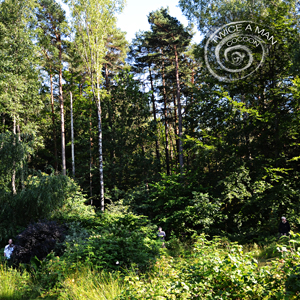 Next up – Gothenburg’s own Twice a Man. Their music range from avantgarde synthpop to music for Sweden’s leading theatre stages. On this particular album, they produce atmospheric electronic music grounded in the fields and forests of Scandinavia.

It is a slow beginning, as the plush build-up of atmospherics takes too long, and doesn’t really establish itself if I’m honest. The musicianship and technical details are highly competent, but I didn’t really feel anything, which is a bit of a shame.

“Cocoon 3″ grabbed me though, through its sense of foreboding menace and creeping claustrophobia – which was quite different to the pastoral wallpaper sounds of the previous tracks. “Cocoon 7″ also took hold of me with its liquid off-kilter rhythms and swooshing atmospherics.

The way the tracks merge into each other does bring to mind how the Orb segue their tracks into sonic explorations, though the obsession with space preferred by the latter is definitely not followed by the band I’m reviewing here. Twice a Man seem very much rooted in the landscapes of Sweden, and take their inspiration from the water and landscapes than journeys through the cosmos.

It’s a lovely journey, and very soothing, but I wish their had been more in the way of  surprise to this album. They are clearly vastly experienced, but there wasn’t really too much which sounded new here to suggest sonic journeys I have never been on. Ambient music is a trip through your own head space, the sounds are your guide, and just like a good book your imagination fills in the visual blanks that the music suggests. I felt like mostly this was a book whose chapters I had read before.

To summarise: it’s a good, but not ground-breaking album, which is something I would love a new aural adventure in the forest to be.