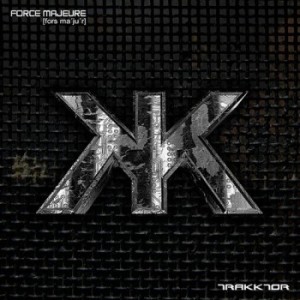 I have to be honest with you. I’m not a big fan of the hellectro (or whatever you want to call this kind of music) genre, but I can appreciate some assorted tracks by Hocico, Combichrist and the likes. I enjoy the pumping beats and juddering basslines, and it works a treat going mental to on the dance floor. It’s fun to see a Swedish band entering this arena, I just wish they would have tried to do something even remotely unique.

Trakktor consists of singer and front man Pierre Maier and Jens Lagnekvist, now a duo after Tobias Janson left the band this spring. The band has existed for 10 years, but this is their debut album. The sound design is a carbon copy of countless other bands of this ilk, and the lyrics are filled with the usual tough guy stuff about darkness and war. The distorted vocals are completely indistinguishable from any other band of the genre. This particular genre is very narrowly defined by its sound though, and if you stray too far, you’re out. Leave those detuned lead sounds behind for example, and you might as well not bother.

The handiwork is not bad per se, within the set boundaries. The drums are pounding with relentless fury, the synthesizers flutter with dizzying frenzy, while Pierre screams angrily at you. I’m guessing it’s bloody fantastic in a dark, smokey, strobey club. Perhaps it’s not meant to be listened to at home. If I had to pick a favourite though, it would probably be “Soothsayer”, which is a bit heavier, moodier and slower than the rest. The slow instrumental “Thirteenth Order” is unfortunately ruined by those detuned lead sounds I mentioned before. Pity that, it sounds like it could have been a neat exit song.

So, maybe I’m not the right person to write this, but I have tried to get under the skin of this monster. So far, it doesn’t give me anything at all, however if you like this type of music I guess it’s a definite buy. And by the way Trakktor, I do like music made after 1987, I just want something a little more intriguing.