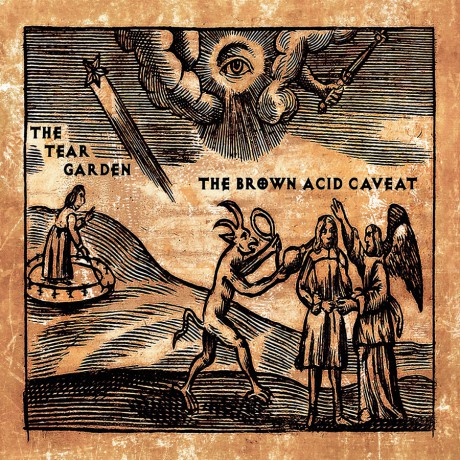 Edward Ka-Spel has been making psyched-electronic music with Cevin Key for 30 years under the project name The Tear Garden. It is amazing how this relationship has continued. Using the channel of internet connectivity the team was able to evolve their passionate works without meeting in the studio. Starting as a Tear Garden crowdfunding exercise, the evidence was announced from the beginning as Ka-Spel mentions in his opening monologue, they were geographically challenged. This collection was recorded in four different locations independently and stitched together over the course of a year (July 2016 – June 2017).

Starting with sparkers of Key’s soundtrack (Los Angeles) before Ka-Spel’s (London) tea cup dialogues. Guest musicians include Ryan Moore, Martijn De Kleer and Patrick Q.Wright and some percussion from Dre. I always get the impression that Edward Ka-Spel is from the near future and speaking about the present tense in secret.

At 12 tracks total, these include longer format compositions. Six go beyond 7 minutes and take a similar time sequence: a rushed progressive beat, a middle section with obvious high point, and lingering fade outs. Not taking away from the music but the slower vocal style of Ka-Spel can only be captured with time. Some song instrumentations are bit fast for the vocals but soon sync up well in this voyage.

Themes include the obvious reference to Brown Acid. “Lola’s Rock” melds transsexuality, drugs, and astrology. The vocal crescendo towards the end of “Strange Land” is a true gift to the ears. The English storytelling traditions give a narrative style soon matched with violin and strings. Standouts include “Stars on The Sidewalk”, “Calling Time”, “Lola’s Rock”, “Sinister Science” and “Kiss Don’t Tell”.

Going back to listen to their first recordings, there is a similarity in the instruments, themes and vocal style. Those Nettwerk label recordings are a bit more somber and flatter than this new generation release. “The Brown Acid Caveat” does take a melancholic, balanced pace. It may not be received well in a quick-paced world but people open to TG psyche-inspirations can enjoy their rich peace, and relax. “Don’t touch the brown acid”.