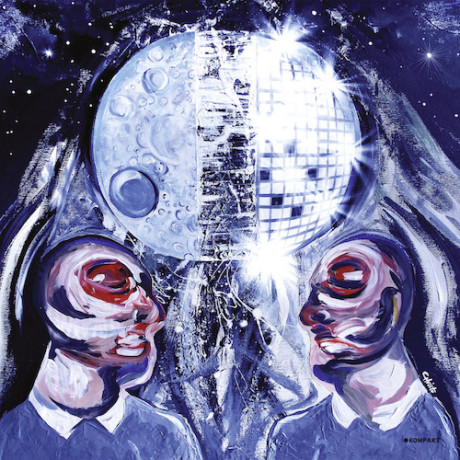 OK… maybe you want a bit more to your review than that, but those three words accurately sum up my feelings towards one of electronic music’s true pioneers. From the majestic, iconic “Little Fluffy Clouds” to the amazing 25th anniversary show at the Brixton Academy, the Orb have weaved their way through the fabric of modern ambient music – influencing all the way.

So it is with pleasure that I review the latest offering “Moonbuilding 2703 AD”.

From the off you can tell that the Orb (now made up of the duo Alex Patterson and Thomas Feldmann) are back on top form. For a start, there are only four tracks, and only one of them comes in at less than 10 minutes long (still, what do you expect from a group who still hold the record for the longest ever British single with “Blue Room”?).

The album kicks off with yet another classic sample (I won’t reveal – listen for yourselves!), before lifting off from the ground to the orbit that is “God’s Mirrorball”. There are plane noises, electronic wobbles and water drops before a heavy rhythm kicks in to reveal a much dancier Orb than you’re maybe used to.

“Moon Scapes” has elements of dub reggae amongst its spacey strings and keys, creating a strange weightless quality to the sounds. The production clearly separates the bass end from the punchy top end, leaving the sounds plenty of room to float around.

“Lunar Caves” starts with an ominous sampled warning before descending into glistening xylophone hits and bass echoes. The atmosphere they seemingly effortlessly create is exceptional, like they are painting aural pictures before your eyes and ears.

The final track “Moonbuilding 2703 AD” (though the deluxe version has three extra tracks, including an Orb tribute to J Dilla), doesn’t grab me as much as the others. It feels a little light musically compared to the previous tracks – dare I say even a little dull. It isn’t until well beyond the halfway mark that the spark comes back again, and samples of birdsong float through morphing rhythms and bass, into possibly the most creative last few minutes of the whole album.

Their craft has been honed to such a degree now that it is just a pleasure to receive new music from them, so listen with your ears, your eyes tightly closed and let the world slowly slip away – the next Orb flight is about to take off – get on board (and avoid the occasional turbulence)…