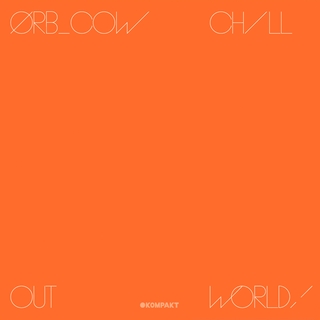 I don’t think you need me to remind you who the Orb are, do you? By now I’m sure you know that Dr. Alex Paterson plus an assortment of other members over the years have produced tracks that redefined ambient music, from the seminal first album “Adventures from Beyond the Ultraworld”, to the recent flurry of activity which has come since joining the Kompakt label.

So, pretty much hot on the heels of the last album “Moonbuilding 2703 AD” comes this next long player, the rather wittily titled “COW / Chill Out, World!”.  Unlike the previous effort, which was years in the making, this was pretty much done on the fly. They recorded found sounds and collected second-hand albums as they toured, and a handful of studio sessions brought everything together.

A blissful opening greets your ears as “First, Consider the Lillys” appears, like the dawning of a new day. Slowly a repetitive scale appears along with foot tapping rhythms, the Hawaiian guitar towards the end creating something almost recognisably the Orb – sound effects and all. A sample about having “butterflies in the tummy” brings in “Wireless MK2″, a very chilled out track, which feels like the effects of watching a 70:s cult film after having too much wine. It is woozy, slow, and serene – a blissed out delight.

This bliss seeps through the next tracks, until “4am Exhale (Chill Out, World!)”, when the beats start to kick in, and what sounds like a kaleidoscope of mini Big Ben bells announce morning has broken.

As always, reviewing the Orb is not easy, as the albums tend to be long journeys, where you dip in and fade out before a change of direction or sample bring you back, so in that respect it isn’t that I can say I like particular tracks, but actually particular moments: The high pitched singing which punctures “5th Dimensions” for just a few seconds, the disco rhythm change of “7 Oaks” or the train that announces the start of “9 Elms over River Eno (Channel 9)”. They are magical moments, and change the mood or feel of the track, sucking you back into the heart of the music. The last track “The 10 Sultans of Rudyard (Moo Moo Mix)” is a peach – a lovely, lovely ambient track which will make you feel like you are wrapped up in cotton wool.

With the concept being just to create something ambient allegedly (although if you notice, there is a theme of track numbers running through the song titles), it seems the Orb have freed themselves from the restrictions of actually trying to have a concept. What we can hear is the sound of two artists simply enjoying making great music together. This isn’t a ground-breaking album, in fact it is really what we have come to expect from the group, but it is them not trying to be clever, and instead turning out quality music.

So – why not a ten? I asked myself this question too – I guess the albums I would give the grade ten to in their career (the first two albums, naturally), had stand-out tracks, in fact their first album had two. This one doesn’t really, but it does have 10 equally brilliant pieces of music.

The Orb are free, and the skies are clear (not a little fluffy cloud in sight).