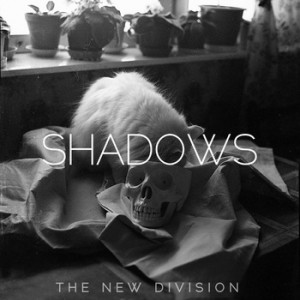 This album has been out in the US since September 2011, but have only recently been picked up for distribution here in Europe. The New Division create soft, dreamy electropop with a indie feeling to it, and they do it well. The sound is contemporary, with both house influences and guitars which makes for an interesting cocktail.
The New Division is a quartet from Los Angeles, and are self proclaimed fans of Joy Division, New Order and Depeche Mode. “Shadows” is their first full length album, after an EP called “Rookie”, and it’s a very well developed band we see. The influences can be heard, but with the band’s own twist on things.

I have some critique though. The vocals are a bit too detached for my liking; void of emotion and variation, making the singing sound almost the same in every song. The vocal melodies are also very similar, so my brain can’t keep up with all the songs after a while.

There are some standout tracks though, album opener “Opium” being one of note. Catchy, dancey and changing style mid-song, it’s a clear favourite. “Munich” is also a high point, punching its way through my speakers. An energetic, powerful song where the vocals finally come into their own. The eight minute disco epic “Memento” creates a nice bookend for the album, invoking images of a hip party continuing into the sunset, complete with a groovy house beat and twanging guitars.

So, some weaker tracks drag the album down, but it’s still definitely worth to check out I think.