The Mystery of the Bulgarian Voices feat. Lisa Gerrard 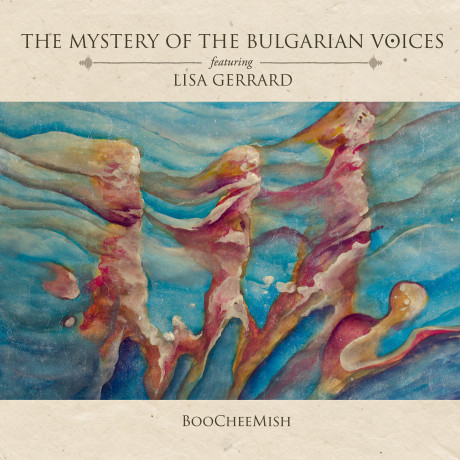 The Mystery of the Bulgarian Voices, formerly known as Le Mystere des Voix Bulgares, is an all female Bulgarian folkloric choir with history going back to the 1950:s. They have now released their first album in over 20 years and it’s called “BooCheeMish” and features 12 tracks. On four of the dozen tracks they collaborate with Lisa Gerrard, Australian contralto of Dead Can Dance fame. It was really Lisa Gerrard who drove me to this release; her voice has always mesmerized me. I found that the whole album was quite daunting yet captivating right from the start, there are really fantastic vocal performances throughout. Although Gerrard’s rich, deep, dark, mournful and unique voice stands out, for me at least, it is a beautiful vocal marriage. You can really tell that the songs and arrangements are made to work together, without diverging from the fact that the focus is on the choir and their cult history. Petar Dundakov invited by executive producer Boyana Bounkova wrote most of the songs.

Lisa Gerrard is a long time admirer of the choir and described the collaboration as the greatest gift she has ever been given (apart from receiving the holy spirit and having her daughter). It was a grand task according to Gerrard: “I didn’t try to copy them, because I can’t”, she said. “With Western Bel Canto singing, it’s from the diaphragm, the belly and the head. With Bulgarian singing, it’s from the chest. It’s not a voice that’s trained. It’s a natural voice.” Although the two types of singing are quite different sounding, I think the combination makes something greater than each on its own.

The album is made entirely with acoustic instruments and vocals, including Bulgarian beatboxer SkilleR (Alexander Deyanov). If you are interested in the instrumentation used you should look up words like kaval, gadulka, jembe, riq, udu and tonbak to name a few. I like the instrumental arrangement, for the most part, sometimes I feel that the acoustic guitar, for instance in the song “Sluntse”, is a bit bland among all the other more interesting sounds. The album is very filmic in parts; probably due to the fact the several of the writers have quite a few soundtracks in their discography.

I haven’t been listening much to world music or folkloric music, not without some coupling to electronic music at least and found the experience very pleasing. I might be biased but I enjoyed the tracks featuring and written by Gerrard (in collaboration with Jules Maxwell), the most. If I were to recommend one track on the album, it would be “Mani Yanni”, where Gerrard’s rich deep voice blends especially beautifully into the world of the Mystery of the Bulgarian Voices and their soundscape and yes, the voices, instrumentation and arrangements send shivers down my spine. If you want to experience the Bulgarian vocal expression more distinctly I would start with the track “Ganka”.