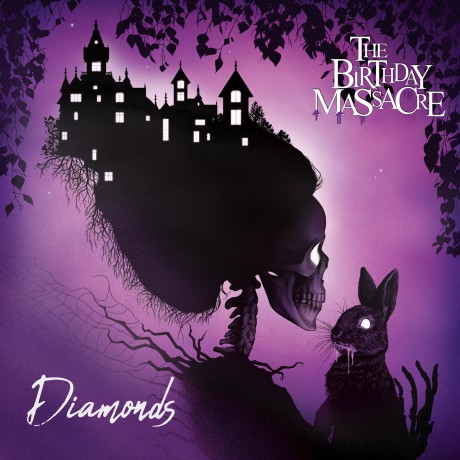 The Birthday Massacre are certainly not reinventing neither genres nor themselves. The new album “Diamonds” follows suit with the precursor albums; presenting that eighties pop catchiness, combined with gothic undertones and visual expression that establish the very paradigm of this band. To me, The Birthday Massacre are excused – every new album triggers a sense of holiday (pun intended; a great track on their “Violet” album was titled “Holiday”). It is almost like those Christmas dishes one actually is pretty fed up with but still would never even imagine removing from the table.

“Diamonds” gives us everything we’d expect: the arena guitar carpets, the cascading synth basses, the rich leads and Chibi’s unmistakable vocals. And just like always what gets me hooked in the end are the melodies. The Birthday Massacre are super skilled in the art of writing vocal lines and harmonies that trigger a certain melancholy. In some spooky way, they bring up memories that may only have been projected like phantom sensations. They might never have happened in the first place but the band tricks me into feeling it.

Now, after eight full-length releases from the band I’m starting to get a bit tired of their recipies. But hey: when number nine is released I will still listen to it and enjoy it. Not doing it would be like celebrating easter without the Easter bunny or Halloween without the jack-o’-lantern.