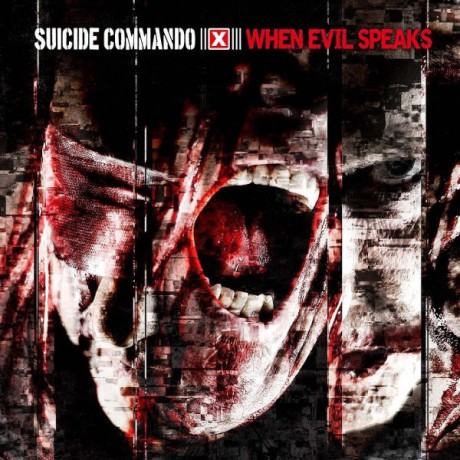 Just to be clear, I’ve never been a fan of Suicide Commando. It’s just not my thing. But I’m trying to listen to “When Evil Speaks” with an open mind, and despite a slight overuse of cliched “hellectro” sounds, I have to say the album is pretty good. It’s not all just “dance your limbs off” style music either, we also get some moodier stuff like “My Blasphemy” and “Monster” which I enjoy. It’s nice to see a wider palette of sounds and themes. However, we’re soon back to normal territory with the track “Attention Whore” for example, which to me is indistinguishable from many other acts of the same genre. And for the record, I know Johan van Roy was one of the founders of harsh dance industrial, having started the band in the 80:s, so it’s likely that other bands have copied him. But still!

Johan van Roy explores the darker passages of the human psyche, and song titles like “Cut, Bleed, Eviscerate”, “Attention Whore” and “Feeding My Inner Hate” pretty much tell you what it’s all about. This is no walk in the park. It’s music to not only pummel your ear drums, it will try to make you insane while ripping your legs off and dancing on your grave. At the same time! If you’ve enjoyed Suicide Commando before, I have no doubt in my mind that you will enjoy “When Evil Speaks”.