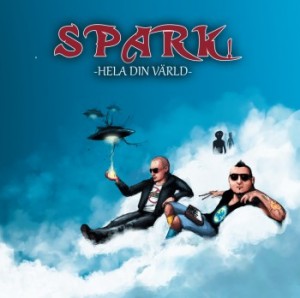 Spark have always intrigued me with their smart blend of pop and classic DAF-style EBM with lyrics in Swedish. For me, their particular brand apexed with the track “Det goda livet” on their last album “Ett lejon i dig” with its furious, monotone bass and intense vocals. Now, the boys have moved to Progress Productions and developed their poppy side a bit more. Thus “Hela din värld” was born, where typical fat bass lines squirm their way under blips and blops and catchy melodies.

Mats Brorsson and Mattias Ziessow even takes on the world of pop on last year’s single “Popkomplex”, about the throwaway pop hits in the charts. This, in a song that if there was any justice in the world would enjoy some decent radio play and chart success.
This is a well put together album, but it does get a bit samey since the recipe is basically the same for each song. Vocally it sounds great but even here there’s a sense of deja vu after a couple of tracks.

I applaud Spark for wanting to do more and break out of the EBM mould, and it really is a solid album with some great songs but your listening session should perhaps be broken down in smaller doses.