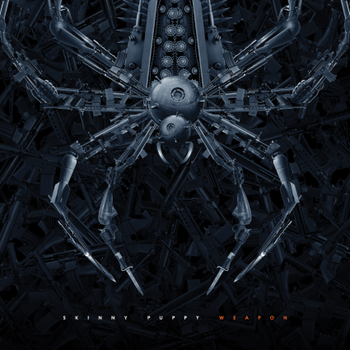 It feels like yesterday when I was overwhelmed by Skinny Puppy’s reunion for the Doomsday show back in 2000. A few years later, I had a brand new album in my hands. While I wasn’t totally convinced by the post-Goettel album “The Greater Wrong of the Right” I still felt that they blew some life into a scene that was rather uninspiring at the time. The part I wasn’t too happy about was the overuse of cut up effects on the lead vocals that have been used rather extensively on the Ohgr releases.

The 2 other studio albums released in this century – “Mythmaker” and “HanDover” – left me pretty indifferent. I felt that the songs were technically correct but lacked some of the hidden textures, harmonies and oddities that I enjoyed on, for instance, my favourite Puppy album “Last Rights” from 1992. All great albums that age well seem to be difficult to get right away. During the early nineties Skinny Puppy albums were always far from easy listening and maybe because of this I was very sceptical about the band’s 2000-sound. After the “Solvent See” tour in 2010 I felt that maybe things were about to change. To say the least, I was very curious about the development of the new “Weapon” album.

So, what does Cevin Key, Nivek Ogre and Mark Walk deliver this time? Well, the overall sound is very much a hint back to the earliest official releases, “Remission” and “Bites”. I am tempted to spontaneously describe the album as a “Remission revisited in hifi”. However, they’ve actually succeeded in blending a lot of different Puppy eras in the mix. The sound is retro and very analogue and if it wasn’t for Ogre’s improved singing technique, (or, more correct; the fact the he actually sings these days) many of the tracks could easily have been almost 30 years old. Don’t get me wrong: I simply love the vocals on the early recordings and I’m definitely not the one advocating that schooled vocalists necessarily perform better…

While the album works as a whole, the actual sonic textures are rather different if you compare the songs, side by side. There are more sonically light weight compositions that are (almost) pop, like “Wornin’” and “Glowbel”. The latter tune’s verse actually reminds me a bit of Real Life’s “Send Me an Angel” (but I won’t hold that against them). Then there are the very retro sounding tunes like “Salvo”, one of my favourites on the album, and “Solvent” which in fact is a re-recording of the track on the “Remission” EP.  There are also more modern hard hitting creations, well suited for the alternative dance clubs. Still, this time these types of tracks feel more like actual songs since the production hasn’t been fixed on cutting up the vocal phrases and then turning the singing into some sort of epileptic jigsaw puzzle. Another favourite of mine is the layered “Terminal”, a track that easily could be put on repeat for God knows how long.

This album is, in my opinion, the best Skinny Puppy release in a very long time and it feels like they have reinvented themselves. “Weapon” sounds like an Ogre+Key+Walk product that is not lacking Dwayne Goettel’s input. It lives its own life like in a parallel existence that now has re-begun right after the earliest formation of our beloved Puppy, before Dwayne was in the band.