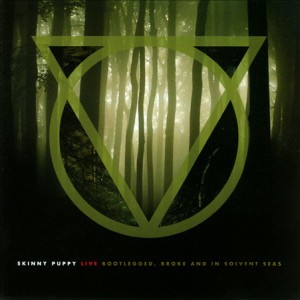 Bootlegged, Broke and in Solvent Seas

The Skinny Puppy live tour of Europe 2010 is documented in this 10 track live audio album. At the time of this recording, the band was promoting 2007’s “Mythmaker” as their new album (“Handover”) was yet to be released. As we look into this tour performance, we have to ask: why a live record in 2012? Clean like a studio record, for the newest fans, it’s probably a good starting point as the raw energy shown here might not be evident on their legacy recordings.

Skinny Puppy in their back catalogue, have many official live releases including: “Ain’t It Dead Yet?” (1987 showdates), “Doomsday: Back and Forth Series 5: Live in Dresden” (2000 showdate) and “The Greater Wrong of the Right Live” (2004 showdates). This author has been present for all of these live recorded events, as well as many of the 2010 Euro tour dates presented on the new live album. I can’t say I’ve actually been to a badly experienced Puppy live show, or even a show not attended well. Puppy’s hallmark is their live show, and trying to present that without the relevant visuals can be difficult to satisfy.

For me, when the words live album and bootleg come together in describing a Skinny Puppy record, “Tin Omen” from “Brap: Back & Forth vol 3&4” comes to mind. A fan recording versus soundboard polished live mix, and the digital age was yet to come… Listening now, we discount the first track, a short mood-setter opener as well during 2009’s “In Solvent See” US/Canada Tour. We now get into content of the eastern EU latter dates of their 25+ cities tour, the bulk of which fans have heard many times on tour. We begin with “Rabies”’ infectious “Rodent”; you have just entered the live show. Just wait until the guitar bits in 3/4 way through, and now you know your ears have popped! “Censor” is back as “Dogshit”; it never sounded so proper. “Addiction”, even here, is a song that has yet to be unflowered properly. After 20 years, I wait for the ultimate mix of this track, still yet to come. A pleasure to listen to, “HateKill” falls into that “Brap” category (it’s not an official release).

This last Puppy setlist discounts standards “Smothered Hope” and “Love in Vein” but continues the tradition of “Worlock”, at a large German summer festival gig performed in daylight throwing the audience on its head. “Morpheus Laughing” is not losing any of its energy. “Assimilate” has got to be the best recorded interpretation here, maybe because it’s the least complex song to pull off live. Halfway through the track, the programmed synth bits seem a bit lazy or watered down, conflicting with the harshness of Ogre’s voice. A roll of the drums, cymbals, and synth fade extends this song even longer by 3 minutes. The CD tracking here is presented out of order considering the actual 2010 tour set list. Closer “Shore Lined Poison” has been described by many hardcore as the best of this collection. It ends with an untreated Ogre voice: “Thank you Budapest, and our friends from Slovakia”. It seems they’ve tried to capture a song from each of their studio albums on this live CD.

This live release is not muddled with overbearing crowd noise and performer banter; it’s almost like new studio interpretations. One key reason I enjoy this act is they do not perform covers. The live performers here are similar to “The Greater Wrong of the Right Live” tour, with the exception of no live guitar, Mark Walk consistently not being present, Justin Bennett (live drums), founding members Key and Ogre, and Ken Marshall on soundboard.

The problem here is that this CD makes you really want more content. It should really be a double CD, more “Process”-era tracks would be great live additions. It must be said that the audio quality of this release is by far the best of their almost 30 years together performing live.

Note:  This single CD package will be re-released as a limited edition double vinyl LP set with the same tracking.