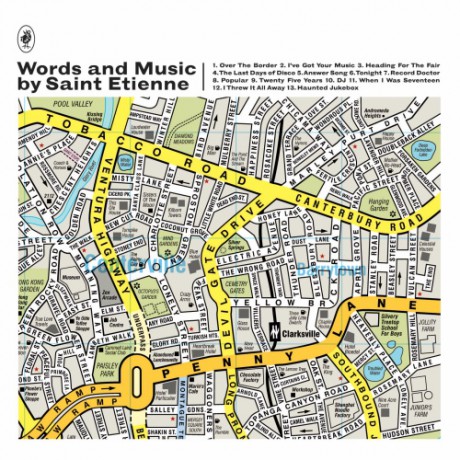 Do you remember how it was when you were a teenager? Maybe you are a teenager? You had just discovered your favourite bands and you started getting all their albums and singles. You started going out to clubs, parties and concerts, starting to take part of a bigger world of cultural possibilities. But now, if you’re like me, you’re getting closer to 40 and life doesn’t really work the same way. You have a job, maybe kids, mortgages and responsibilities. Can music still be as big a part of your life as it used to?

This is the big question dealt with on the new Saint Etienne album, “Words and Music”. Sarah Cracknell starts to reminisce already on the first track, “Over the Border”, singing about buying that first single, discovering the synthesizer, forming your identity. But she goes on, “When I’m married with kids, would Marc Bolan still be so important?”. It’s one of the most beautiful album openers I’ve come across, and sets the tone for the rest of the album.

Unfortunately, Saint Etienne is a very uneven band, at least to me. Their style of synthpop comes from the “intelligent” and introspective British tradition with a lot of focus on the lyrics. Sort of like Pet Shop Boys, but with more disco vibes. Some of their stuff is utterly brilliant, other times it’s just a bit dull. In the first category lies classics like “He’s on the Phone”, “Like a Motorway”, “Pale Movie”, “You’re in a Bad Way”, “Only Love Can Break Your Heart” etc etc. Being a hardcore anglophile, I love their cool britishness, and they are never bad, just not always as exciting as I feel they could be. Sometimes, they’re almost too cool.

So, can music still be a big part of your life? Of course. Granted, I don’t have children, but I know people who do and still are greatly invested in music. Either performing it, running their own labels, writing about it or just discovering it. The fact that I’m still here writing about music at 38 is a testament to how important music is to me. There might not be as much time for it as there was when we were young, but it works. I still yearn for that great rush when you hear an awesome track for the first time, and it still happens from time to time. It didn’t happen that much on this album, but “Over the Border” and “I’ve Got Your Music” are up there, sniffing at the top.