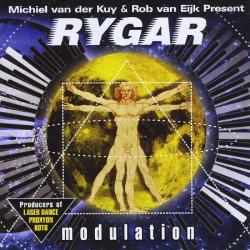 If you grew up in the eighties and listened to electronic music, chances are pretty big that you know what italo disco is. You might also have heard of a quirky little sub genre called space synth with a different focus than its parent. Space synth consists of spacey sounds, octave bass lines and catchy, fast, happy (almost naive) lead melodies and are mostly instrumental except for the occasional vocoder drenched lyric. Almost all the songs were about sci-fi, aliens and space, hence the name. The big names in the genre back in the day were Laserdance, Koto and Cyber People – there were some more, but it was a really narrow genre.

Dutch producer Michiel van Der Kuy was the main guy behind Laserdance, and later actually “took over” the Koto name as well. He also had a bunch of aliases, chiefst among them Proxyon and Rygar. He was also the man behind the huge nineties hit “James Brown Is Dead” under the name L.A. Style. A busy man as you can see. Now after a long hiatus in the space synth genre, he and his old cohort Rob van Eijk are back as Rygar, with the album “Modulation”.

I have no idea why he chose to step back into the old territory, but I don’t mind, that’s for sure. If you’re a fan of the previously mentioned bands, you’ll know exactly what to expect – a weird trait of those bands is that they each had their trademark sounds. Especially Koto with the ever present “koto bass”. Rygar is extremely close to Laserdance, but you can actually tell that time has gone by during the projects hiatus. Some tracks even dare to use new, modern sounds to great effect. There are some slight reworkings of old tracks too, but mostly it’s newly composed material.

I don’t think this album will bring in many new listeners and it’s not original at all, but I really enjoy it. And if you’re already a fan, then stop reading immediately and hit up Amazon or something.