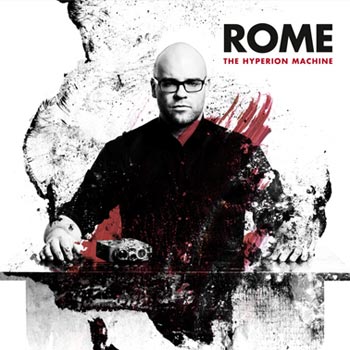 The new album from Rome “The Hyperion Machine” is the 12th, not counting EP:s and the anthology released last year. For little more then a decade Luxembourgian Jérôme Reuter’s talent and dark voice have treated us the best neofolk stories I’ve heard. But this time it sounds a bit different, and it is difficult for me to decide whether I like what I hear or not.

I don’t think there is a single note or word on Rome’s albums that aren’t planned and deliberate, so this change is no coincidence. The whole album feels more, for the lack of a better word, accessible. Mr Reuter has since long gotten his head above the surface in the neofolk marches and now also chanson noir territory and is gazing upon the tempting shoreline that is dark folk and even further up towards the rocky slope that is alternative rock. So there are fewer samples and ambient parts than before and the seemingly ever-present guitars take the lead in the peloton of the layers forming the soundscape and mood in most of the songs.

The album is brilliantly produced and quite uniform in production, perhaps with the exception of “The Alabanda Breviary”, which feels more like a American folksong than a Rome adventure to me. Much of that comes from the percussion, I think. That said, the album is quite varied, but still feels like one entity.

Included is a duet with Jérôme’s buddy and famous Swedish icon Joakim Thåström (Peace Love & Pitbulls, Ebba Grön, Imperiet) called “Stillwell”, which is quite nice but I would have preferred Mr Thåström’s voice slightly less processed and filtered. The ten songs, plus intro, forming the album ends with a bonus track, a version of Thåström’s “Fanfanfan” complete with a Swedish chorus. Apart from Swedish and English, there are also parts in Latin and German on “The Hyperion Machine”.

As always the lyrical prowess is outstanding and you could dwell into all topics for ages and look for references and clues. It is ancient mythology mixed with highly educated stories of events and history, and still leaves quite a lot of questions and room for interpretation, which I like. At the same time you could just relax and listed to the melodies and this time they appeal to a wider audience. My personal favorite of the bunch is “The Secret Germany (For Paul Celan)”.

Roughly a decade into his career, it feels like Jérôme has written the introduction to Rome, a starting point, leading you into the darker firmament of Rome for those interested.