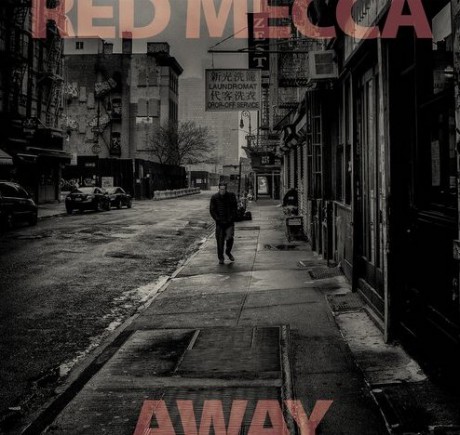 2020 was quite a year. For Red Mecca it was their inspiration for this, their sixth album.

The Swedish duo of mastermind Jan Strandqvist (keys and music) and newer member Susanne Jonsson (vocals, keys, lyrics) generally make music along the atmospheric darkwave/post-punk/synth line, and this album is no different in that respect. One thing that differs in the dream-like soundscapes presented here is that the dreams are of escape, being somwhere else – being “Away”.

With such universal feelings, it is obvious that there is much here that will resonate with people, as many artists do what artists do in these circumstances, create art and express their feelings towards the situation they find themselves in. The album runs the gammut of emotion in music and lyrics – from optimistic soundscapes to effected electric guitars; angelic vocals to despairing lyrics, it’s all here.

The opener “All Those Stored Errors” (as good a track title as I’ve seen so far this year, by the way), is a quite uptempo piece of electronic synthpop. However there is an underlying melancholy if you listen carefully, a theme that runs through the heart of this album. “Runaway with Me” again alludes to the attitude of escapism. There is a flatness to the vocals of the chorus of Susanne compared to the rest of the track, perhaps alluding to the lack of possibility of this actually being able to happen.

“Atlantic” is an early favourite. It’s dream-like, the vocals breathy, with a slighly disjointed feeling added to the end, to make everything feel slightly unsettling. Line’s like “I can’t breathe” delivered against a blissfully bubbling backdrop make this song a delightful oxymoron. It’s pessimisticallly beautiful. “Chimera”, the final track, is the best thing on here by a mile though; a gently flowing synthscape, powered by a gentle rhythmic drumbeat and some angelic vocal sweeps over the top. It’s a soothing closer with more than a hint of optimism to leave the listener with a hint of sweetness.

The slower tracks are a mixed bag. “My Intergalactic Cab” runs a bit too slow, plodding through a misty stew of atmospheric synths, with a heavily vocodered Susanne short-circuiting lyrics over the top. It’s not my favourite, but an interesting experiment. “Let Me in” takes things to the ultimate, seemingly dropping down into a synth drone half-way through the track (and to a lesser extent at the end), which leaves quite an impact being that the track which sandwiches this event is quite uptempo and rhythmical. Again, slightly unusual, but it does catch the attention.

Obviously, a lot of the album alludes to escapism and the wish to be “Away” (“Songbirds”, “Runaway with Me”, Atlantic”), the optimism tempered by the sometimes despair and doubt expressed in the lyrics. It is this complication of messages that intrigued me the most. Another solid addition to their catalogue.