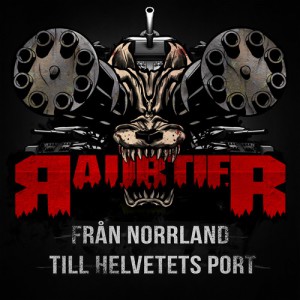 The beast from the northern wasteland is back again. Raubtier, the industrial metalists from Haparanda way up in the northern part of Sweden, has returned. Hulkoff and the boys have been angry enough for 12 songs on this their third album, and it continues down the trodden path of the previous ones.

One thing that’s changed is that the songs are even more catchy this time, almost to the point of being “schlager”. There are also more soft segments, where unfortunately the cheap synthesizer sounds drags it all down, especially for a hardened electronic music fan such as myself.

By now the novelty of Raubtier has worn off a bit, but I still enjoy wild rides like “Besten i mig”, and Hulkoff is still spitting, snarling and tearing out his lyrics like he’s actually a demon going back to hell (“Från Norrland till helvetets port” means literally “from Norrland to the gates of hell”), giving Raubtier a very distinctive sound. There’s not as many traces of Rammstein to be found now either, although the mix of electronics and chuga chuga guitars is still present of course. The predator is mining forth its own style.

But in the end it’s basically more of the same, and even though they do it well, I would like to see them take more chances and work a bit more on their production.