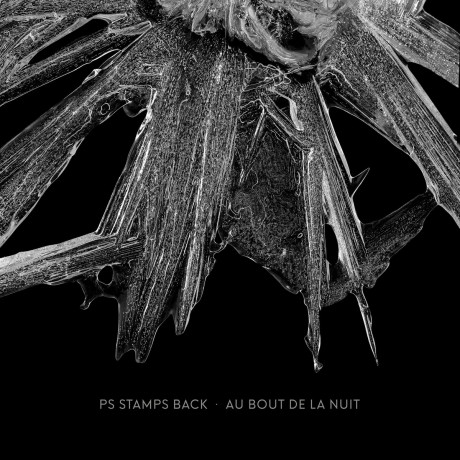 PS Stamps Back is the solo project of Iason, the man behind the Athens-based 1000+1 Tilt, a label that has constantly explored the more unconventional avenues of underground music. Taking its inspiration from works of literature, and I believe meant to be played along while reading the literature excerpts supplied with the release, “Au Bout De La Nuit” brings some leftfield electronic ambience to the table.

We begin with “A Boy and His Dog”, a full nine-and-a-half minute track of trance-like loops, which are more electronic than ambient. There is constant evolution on the repetitve theme, and some impressive bass-end. ”High-Rise” follows, and picks up the tempo, creating a giddy atmosphere as it goes. It has to be said, Iason is something of a master of changing things while keeping them the same, as you seldom notice the repetitive elements change, but there is always something happening, making the tracks as hypnotic as a candles are to moths. “Borderliners” is definitely another one to listen to, to hear this process in full force. ”The Inheritors” builds things up even more, riffing on an acid line that keeps you involved through to the last bars.

“The Demolished Man” is one of the most interesting tracks here for me, being that it builds up from what sounds like an operating table, with the atmospheres developed into quite a weird rhythmical track. There are beats and handclaps, but also screeches and howls, as well as the hypnotising surgical scanner beep. This seems to pick up again in “Floating Opera”, though pounding beats, and even snippets of spoken samples blend into the mix here.

“Darkness at Noon” is probably the most conventional track here. It even turns into something quite rhythmical for a time, but drone takes over from beats before they are allowed to stay for too long. My favourite has to be the last track “Ubik” though – this one mutates from ambient through to jittering acid and back. For me, the shorter tracks are more effective here, prime example “Beyond Lies the Wub”, an interesting track that morphs, mutates, but doesn’t outstay its welcome. The longer ones tend to test the mental stamina, after all the repetitive nature can stop you listening to the track completely – this is OK if you want to play as atmosphere, but not for listening to.

“Au Bout De La Nuit” is one of those brilliantly impossible to pigeon-hole albums that exists because it has to. It’s a glorious porridge of ever morphing electronic ideas -  and music is all the better for it.