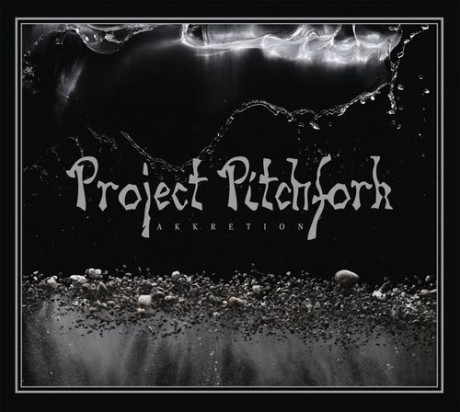 Peter Spilles and his Project Pitchfork have been at it since 1989, when he and Dirk Scheuber joined forces to pioneer dark electro. Since then, the band’s career have had its ups and downs, and I feel that a lot of people think of their later output as subpar. I’ve also seen some comments online about ”Akkretion” where people really hate it.

Well, I don’t. I actually think it’s a return to form for the band, with a whole bunch of really strong compositions. Sure, Peter’s vocal style doesn’t lend itself to much variation. But I think it works really well with the material, creating a gravelly texture to the otherwise very melodic songs. Musically, I feel that they’re branching out a bit with a slightly wider palette with beautiful strings, fatter bass lines and heavier beats.

This is supposedly the first in a trilogy of albums themed around genesis, the birth of stars and and planets; existance itself. “Fragment” and “Elysium” are the names of the upcoming parts, and it’s going to be interesting to see how they hold up.

Try out ”Ascension” (and I actually prefer the album version without vocals by guest Sue, but instead sounds a bit more menacing), ”And the Sun Was Blue” or the melancholic ”Crossfire” and make your own opinion of the album. If you don’t like them, you won’t like the rest either. Myself, I love them.