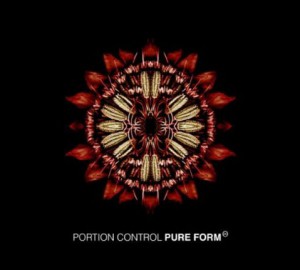 When the legendary UK duo Portion Control returned with “Wellcome” back in 2004 they were definitely welcomed back by the EBM puritans who lead a starving cultural existence at the time. This was during the era of futurepop and before the old school body revival movement. A retro hysteria triggered by a series of events, like e.g. the reunion shows of Nitzer Ebb in 2006.

Portion Control certainly returned with a strong sound and a strong image. The sonic production and the visual artwork were worked through with a great sense of detail, despite the overall sense of minimalism.

After the initial blast of the comeback of the veterans, the band has been releasing new albums quite frequently and consistently stuck to a template that I, personally, often find too similar. Of course, the sounds and programming are impressive. But at times there seem to be a few too many fillers on the new releases and on new album “Pure Form”. I miss the final sense of impact. I don’t hear the flow of an album from an actual band; this sounds more like a soundtrack for some new arcade/computer game. This album would be a perfect soundtrack for some doomy, “Mad Max”-inspired first person shooter game but as a pure listening experience I get the impression that this is Portion Control on auto pilot. When I keep in mind that Portion Control is a band with an overall master-plan and concept including both sound and vision I must admit that “Pure Form” actually works and grows over time. I reckon this release would have been better off as a video project with both music and moving images.

“Pure Form” sure has all the ingredients to be as good as the other albums released after the reunion. I do like the way Dean Piavani’s vocals are raw and very direct in the mix but his monotonous chanting is becoming more and more predictable. Though Portion Control were pioneers of the genre they, every now and then, seem to get trapped in cliches they invented themselves. The bottom line: the technical quality of this new release is high but I’d love to be a bit more surprised at times.